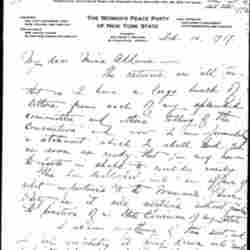 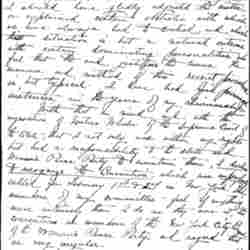 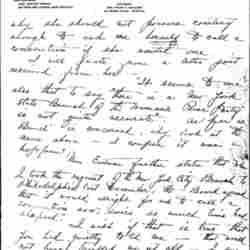 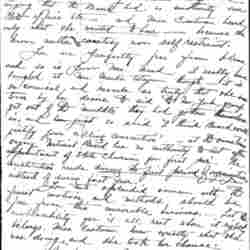 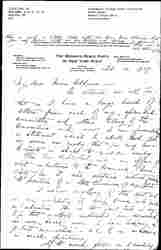 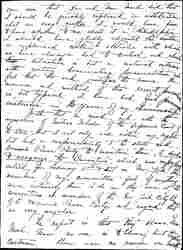 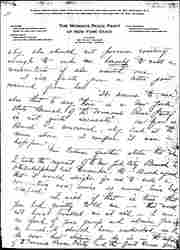 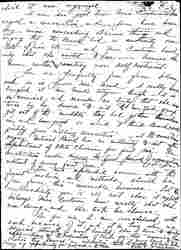 ↑This is just a little talk with you dear Miss Addams that you only know what we are thinking and doing. A formal letter will be sent later. R. C. W.↓

The returns are all in that is I have a large bunch of letters from each of my splendid committee and others telling of the convention and now I am formulating a statement which I shall send you as soon as ready, that you may have the facts in shape to consider easily.

This has developed with an affair of vital importance to the Woman's Peace Party, as it will establish without question the position of a State Chairman of any state.

I abhor anything of this sort, and I feel wretchedly at being drawn into such a situation. It is the first time in my life that anything unpleasant has occurred on any board where I have had any important connection -- and I am no novice in such positions.

If the board felt, as I readily [page 2] can see that you and Mrs. Mead did, that I should be quickly replaced or withdrawn -- what an easy matter it would have been to have spoken to me about it in Philadelphia. I should have gladly adjusted the matter, or explained certain obstacles with which we have always had to contend and which this situation is but a natural outcome with certain dominating personalities who feel that the end justifies the means. The manner and method of this recent procedure is but typical. I have had five pronounced instances in the years of my chairmanship.

With that in mind and with the injunction of Justice Wheeler of the Supreme Court of the State, that I not only was within my rights but had a responsibility to the state and Woman's Peace Party to maintain them, I decline to recognize the Convention, which was improperly called for February 1st & 2nd in New York! The members of my committee feel if anything more intensely than I do as they were at the convention as members of the New York City Branch of the Woman's Peace Party, and regard that as very irregular.

The report is that "they" blame Mrs. Mead. Now no one is to blame but Crystal Eastman. There was no reason on earth [page 3] why she should not possess courtesy enough to ask me herself to call a convention if she wanted one.

I will quote from a letter just received from her --

"It seems to me also that to say 'there is a New York State Branch of the Woman's Peace Party' is not quite accurate". As far as "Branch" is concerned, why look at the name above -- I confess it was a happen!

Miss Eastman further states that "when I took the request of the New York City Branch to Philadelphia last December, the Board agreed that it would alright for us to call a convention now, since so much time had elapsed."

I wish if that is true that you had quietly told me -- that would not have troubled me at all -- I am so fond of your group and admire you all so much, I should have understood as I do now that whatever you do is in the interest of the Woman's Peace Party and the Great Cause for [page 4] which it was organized.

I can see just how Miss Eastman has urged a convention, and you have been very nice [conceding] obvious things and urging that the Board had no authority over state affairs etc -- and Miss Eastman heard only what she wanted to hear -- because she knows neither ↑innate↓ courtesy nor self restraint.

You are perfectly free from blame and so is poor Mrs. Mead. I really have laughed at Mrs. Mead's telegram though -- it is so comical, and reveals so truly that she was torn by her desire to aid the New York group get out of the "muddle" they had gotten themselves in, and her just so said "I think Board would justify your calling convention" -- at the same time saying "National Board has no authority to act after appointment of state chairman for first year". The constitution reads during the first period of organization, instead of during first year.

You two splendid women with the finest motives and methods, should be free from this miserable business. Let the responsibility for it all rest where it rightly belongs. Miss Eastman knew exactly what she was doing, and she took her chance.

As for me I am overwhelmed with work because of it, and at a time when my physical strength is most limited. Also I have to make explanations to the Federation of Clubs for that unwise Resolution they passed "in retaliation", and it may lead to me losing my opportunity for good work in the clubs. 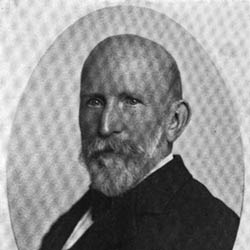 Williams gives Addams her version of the controversy over the New York State Convention of the Woman's Peace Party.