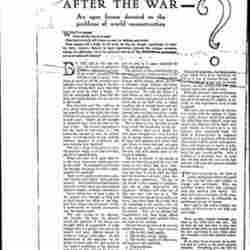 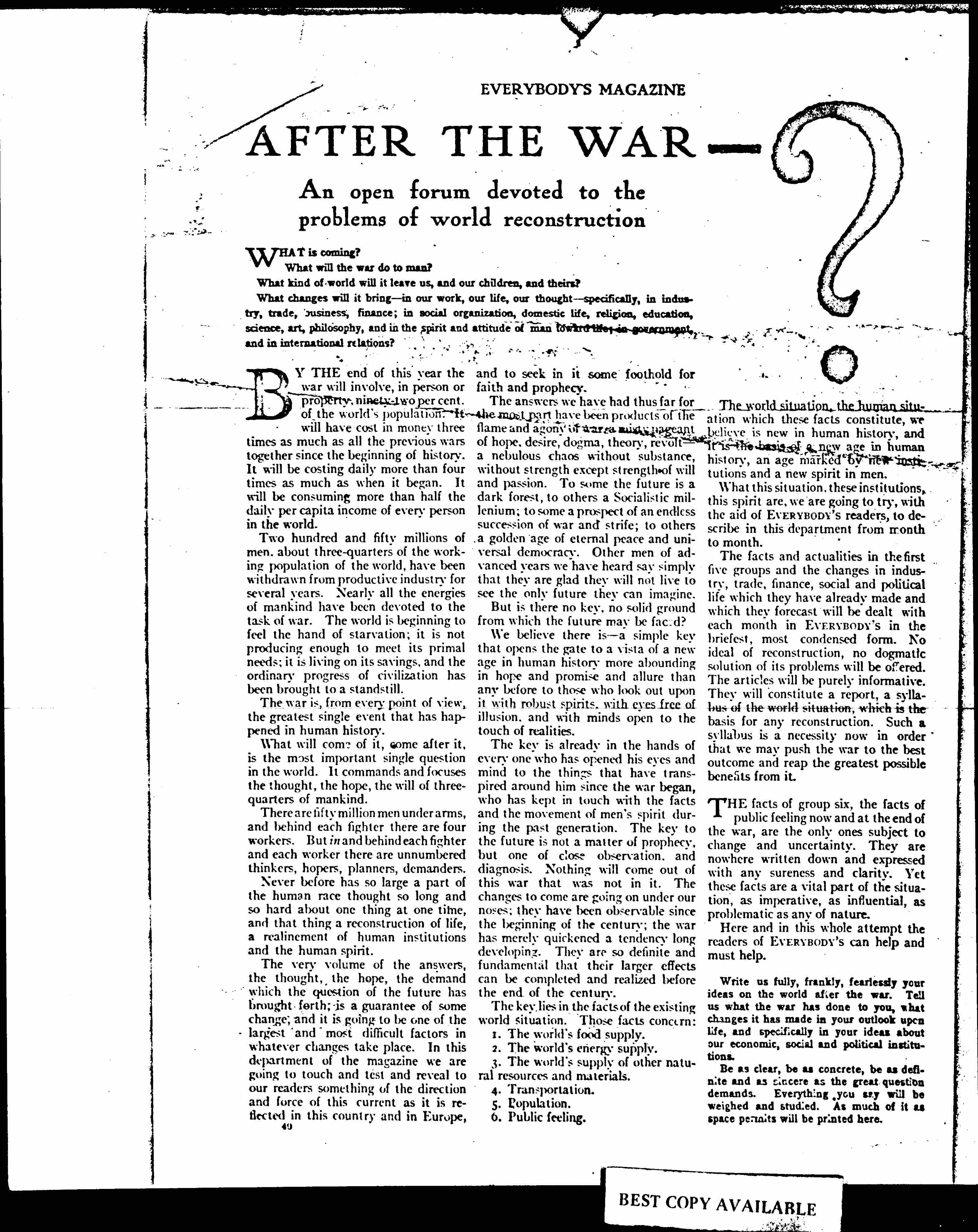 An open forum devoted to the problems of world reconstruction

What will the war do to man?

What kind of world will it leave us, and our children, and theirs?

What changes will it bring -- in our work, our life, our thought -- specifically, in industry, trade, business, finance; in social organization, domestic life, religion, education, science, art, philosophy, and in the spirit and attitude of man toward life, in government, and in international relations?

Two hundred and fifty millions of men, about three-quarters of the working population of the world, have been withdrawn from productive industry for several years. Nearly all the energies of mankind have been devoted to the task of war. The world is beginning to feel the hand of starvation; it is not producing enough to meet its primal needs; it is living on its savings, and the ordinary progress of civilization has been brought to a standstill.

The war is, from every point of view, the greatest single event that has happened in human history.

What will come of it, come after it, is the most important single question in the world. It commands and focuses the thought, the hope, the will of three quarters of mankind.

Never before has so large a part of the human race thought so long and so hard about one thing at one time, and that thing a reconstruction of life, a [realignment] of human institutions and the human spirit.

The very volume of the answers, the thought, the hope, the demand which the question of the future has brought forth, is a guarantee of some change, and it is going to be one of the largest and most difficult factors in whatever changes take place. In this department of the magazine we are going to touch and test and reveal to our readers something of the direction and force of this current as it is reflected in this country and in Europe, and to seek in it some foothold for faith and prophecy.

The answers we have had thus far for the most part have been products of the flame and agony of war, a misty pageant of hope, desire, dogma, theory, revolt -- a nebulous chaos without substance, without strength except strength of will and passion. To some the future is a dark forest, to others a Socialistic [millennium]; to some a prospect of an endless succession of war and strife; to others a golden age of eternal peace and universal democracy. Other men of advanced years we have heard say simply that they are glad they will not live to see the only future they can imagine.

But is there no key, no solid ground from which the future may be faced?

We believe there is -- a simple key that opens the gate to a vista of a new age in human history more abounding in hope and promise and allure than any before to those who look out upon it with robust spirits, with eyes free of illusion, and with minds open to the touch of realities.

The key is already in the hands of every one who has opened his eyes and mind to the things that have transpired around him since the war began, who has kept in touch with the facts and the movement of men's spirit during the past generation. The key to the future is not a matter of prophecy, but one of close observation, and diagnosis. Nothing will come out of this war that was not in it. The changes to come are going on under our noses; they have been observable since the beginning of the century; the war has merely quickened a tendency long developing. They are so definite and fundamental that their larger effects can be completed and realized before the end of the century.

The key lies in the facts of the existing world situation. Those facts concern:

3. The world's supply of other natural resources and materials.

What this situation, these institutions, this spirit are, we are going to try, with the aid of EVERYBODY'S readers, to describe in this department from month to month.

The facts and actualities in the first five groups and the changes in industry, trade, finance, social and political life which they have already made and which they forecast will be dealt with each month in EVERYBODY'S in the briefest, most condensed form. No ideal of reconstruction, no dogmatic solution of its problems will be offered. The articles will be purely informative. They will constitute a report, a syllabus of the world situation, which is the basis for any reconstruction. Such a syllabus is a necessity now in order that we may push the war to the best outcome and reap the greatest possible benefits from it.

THE facts of group six, the facts of public feeling now and at the end of the war, are the only ones subject to change and uncertainty. They are nowhere written down and expressed with any sureness and clarity. Yet these facts are a vital part of the situation, as imperative, as influential, as problematic as any of nature.

Here and in this whole attempt the readers of EVERYBODY'S can help and must help.

Write us fully, frankly, fearlessly your ideas on the world after the war. Tell us what the war has done to you, what changes it has made in your outlook upon life, and specifically in your ideas about our economic, social and political institutions.

Be as clear, be as concrete, be as definite and as sincere as the great question demands. Everything you say will be weighed and studied. As much of it as space permits will be printed here.

Wheeler puts out a call for ideas about what will happen after World War I.