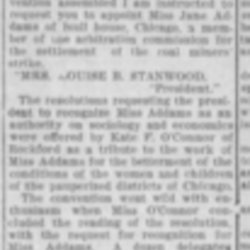 ANOTHER MEMBER OF THE COAL MINE COMMISSION PROPOSED.

The Illinois Federation of Clubs Request President Roosevelt to Name Miss Jane Addams for the Arbitration Board -- Resolutions Adopted.

Champaign, Ill., Oct. 18. -- The Illinois Federation of Women's Clubs yesterday afternoon petitioned President Roosevelt to appoint Jane Addams of Hull House a member of the arbitration commission for the settlement of the miners' strike to represent the interests of the families of the miners.

The resolutions were adopted without dissenting voice. Immediately after the adjournment of the convention Mrs. Stanwood, the retiring president of the federation, telegraphed the following message to the White House:

"President Theodore Roosevelt, Washington, D.C.: By a resolution unanimously adopted by the Illinois Federation of Women's Clubs in convention assembled I am instructed to request you to appoint Miss Jane Addams of Hull House, Chicago, a member of the arbitration commission for the settlement of the coal miners' strike.

The resolutions requesting the president to recognize Miss Addams as an authority on sociology and economics were offered by Kate F. O'Connor of Rockford as a tribute to the work of Miss Addams for the betterment of the conditions of the women and children of the pauperized districts of Chicago.

Dr. Cornelia [De] Bey of Chicago and Mrs. Laura D. Pelham gained the opportunity to express their appreciation for the woman whom the delegates have styled "The angel of the Ghetto."

The resolutions, which were adopted amid great applause, follow:

"Whereas, The student of sociology and economics is recognized in the counsels of the coal strike; and

"Whereas, Women and children, as well as our homes, are involved in the result; therefore be it

"Resolved, That the members of the Illinois state federation do hereby recommend the recognition of Miss Jane Addams in the [councils] of the arbitration commission. Be it further

"Resolved, That our president be instructed to forward at once to President Roosevelt the unanimous request of the Illinois Federation of Women's Clubs to appoint Miss Jane Addams a member of the arbitration commission for the settlement of the miners' strike."

The club women from all over the state are firm in the belief that President Roosevelt will at least invite Miss Addams into the councils of the commission to defend the rights of the suffering miners and children in the anthracite districts, even if a vote is denied her. 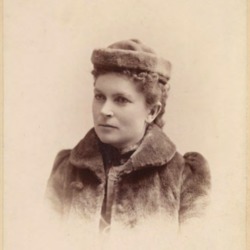 Reports the creation of a resolution by the Illinois Federation of Women's Clubs to name Jane Addams to President Roosevelt's commission to settle a miner's strike.

Illinois Federation of Women's Clubs and Stanwood, Louise B. , “Resolution Calling for Addams to be Appointed to the Arbitration Commission for the Miner's Strike, October 17, 1902,” Jane Addams Digital Edition, accessed May 18, 2022, http://digital.janeaddams.ramapo.edu/items/show/16927.