Thoughts on the Comic Valentine, February 2, 1902 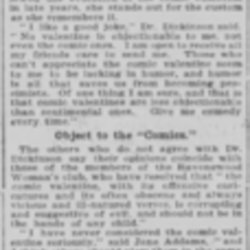 See No Good in the Caricatures and the Verses That Accompany Them and Declare They Are Too Vicious to Be Allowed in the Hands of Children -- Dr. Frances Dickinson, However, Says She Prefers the "Comics" to Alleged Sentiment.

The comic valentine was branded as vicious by all except one of the women who expressed themselves yesterday. The exception was Dr. Frances Dickinson, who says comedy is more wholesome than sentiment even on St. Valentine's day. Dr. Dickinson is a member of the Social Economics Club, and while admitting that she had not followed the evolution of the comic valentine in late years, she stands out for the custom as she remembers it.

"I like a good joke," Dr. Dickinson said. "No valentine is objectionable to me, not even the comic ones. I am open to receive all my friends care to send me. Those who can't appreciate the comic valentine seem to me to be lacking in humor, and humor is all that saves us from becoming pessimists. Of one thing I am sure, and that is that comic valentines are less objectionable than sentimental ones. Give me comedy every time."

Object to the "Comics."

The others who do not agree with Dr. Dickinson say their opinions coincide with those of the members of the Ravenswood Woman's Club, who have resolved that "the comic valentine, with its offensive caricatures and its often obscene and always vicious and ill-natured verses, is corrupting and suggestive of evil, and should not be in the hands of any child."

"I have never considered the comic valentine seriously," said Jane Addams, "and I think others should view them in the same light. There is no question, however, that they are coarse and no good can possibly come from them. Their saving grace is that children view them in a simple way and their effect on them is, therefore, not the same as it is on their elders."

"I have had a strong feeling for years against the comic valentine," said Mrs. A. W. Hester of the Lake View Woman's Club. "The suggestions they convey to children's minds is bad. They are not good in thought or intent. The movement of the Ravenswood Woman's Club is in the right direction."

Valentine's day is approaching and the shops where the children spend their pennies have begun to assume their "comic" aspect. Two for a cent is the prevailing price. The verses which accompany "Antediluvian Old Maid," which is a fair sample of the valentines, read:

You battered old piece of antiquity;
Equal in age to the hills!
The sight of your well-withered visage
Our minds with wonderment fills.
By what means did you 'scape the Deluge,
And survive through all this time?
For when Noah's kids were babies,
I am sure you had passed your prime.

Here's a verse on "The Guy That Plays Golf":

You farcical scare-crow in golf array,
If you were not so funny you't give me a fright.
I hardly know whether, on seeing you play,
To shudder with horror or laugh at the sight.

And another on "A Foppish Little Fool":

You weazened little monkey,
Do you really suppose
That for a man you'll pass yourself
By wearing dudish clothes?
If so, you're much mistaken,
My puny little friend,
For no tailor in creation
Your insignificance could mend.

Addams dismisses comic valentines as coarse at a meeting of the Ravenswood Woman's Club.