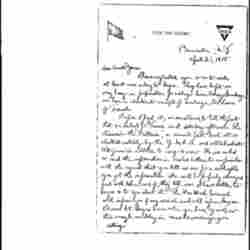 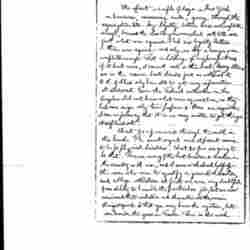 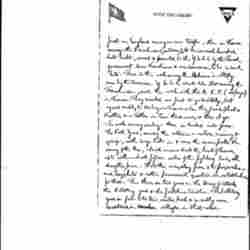 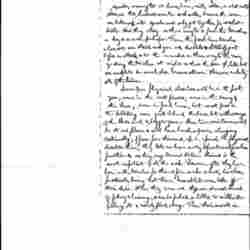 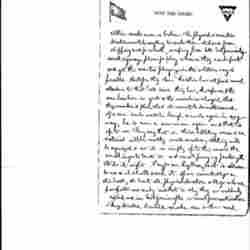 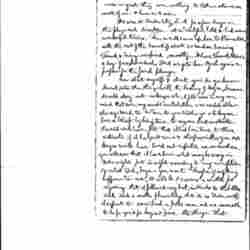 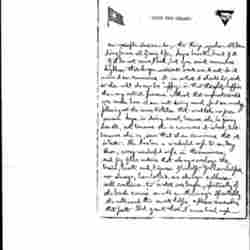 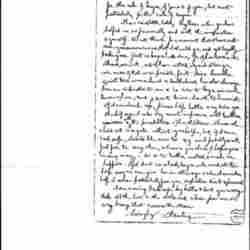 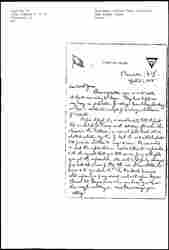 I have neglected you so as to write at least once a day to Myra. They have kept us very busy in preparation for sailing. Even today, Sunday, we have in addition to a couple of meetings, two hours of French.

Before I forget it, we are allowed to tell the fact that we embark for France next Saturday afternoon. The steamer is the "Victoria," a small fast boat. It is chartered entirely by the Y.M.C.A. and will take about 150 of us in addition to cargo & crew. We are asked to send the information in sealed letters to our families with the request that you tell no one for a week after you get the information. We will be properly envoyed and well taken care of, they tell us. I have written to Myra & to you about it. The War Work Council will inform you of my arrival and will inform Myra. Please let Myra know when you hear, by wire, so there may be no delay in case her message goes astray. [page 2]

We spent a couple of days in New York on business, measuring suits, going through the organization Etc. My loyalty letters were not complete enough, because the Los Angeles men had not told me just what was required. I had six loyalty letters -- three were required -- and only one by a lawyer was complete enough. That is holding up my passport and if it don't come, I cannot sail on this boat. Many others are in the same boat. I could just as well ↑have↓ had it O.K. if I had only been able to get any information at all correct. Even the Federal authorities in Los Angeles did not know what was required here, as they had me sign only two papers & three are required. I am so far away that it is no easy matter to get things straightened out.

About 300 of us went through the mill in this branch. The most urgent need at present seems to be for physical directors. About 90 of us are going to be that. There are many of the best directors & [coaches] in the country with us, and I am with about half of the [men] who seem to qualify on general character, and college athletics. At first we were very doubtful of our ability to handle the particular job, but are now convinced that initiative and character are the main things required. So that you may know the system, let me describe the zones in France. There is the work [page 3] first in England among our own troops, then in France among the Frenchmen (soldiers), to be several hundred huts built, owned & presented to the Y.M.C.A. by the French government. One Frenchmen & one American to be in each hut. There is the work among the Italians in Italy run by the American Y.M.C.A. about like that among the Frenchmen, and the work with the A.E.F. (our boys), in France. They wanted me first to go to Italy, but agreed readily to our boys in France when they found I had a Brother & a Father in law there now, so there I go. The work among our boys there is divided into zones. The Port Zone, among the soldiers & sailors coming & going, with large [boats?] in & near the main ports. The army of the Rear, which [moves?] about the heart of France, up to within about fifteen miles of the fighting line, all along the line. There the men stay from 3 to five weeks, and large huts & rather permanent quarters are established for these. Then there are two zones in the Army of Attack, the Billeting Zone & the frontline trenches. The billeting zone is from 3 to ten miles back & is really men quartered in trenches villages in that area. [page 4]

Here the men are broken up into cliques and squads, so many to a house, barn, mill, cellar, or what not. Here is the hardest area to work with, because the men are broken up into squads and only get together for meals & drill. Here they stay on their way to & from the trenches a day or a week perhaps. Then the front line trenches where our men start and give out chocolate & hot stuff just before an attack & to the wounded on their way to the rear, go along the trenches at night to cheer the men up, Etc. but are unable to do much else because all men there are on duty all of the time.

Some of us physical directors will be in the port zone, some in the rest places, some in the Army of the Rear, some in front lines, but most of us in the billeting area just behind the lines but within range of the three inch & bigger guns. Here two secretaries will be at one place & will have bunches of men changing continually, of from five thousand up in [a bunch?]. The physical directors there, they tell us have a very definite and peculiar function or one they say General Petain claims is the most important of all the work. These men after they have been in the trenches for three or five weeks or more, have been practically during that time to unable even take off their shoes. When they come out they are almost devoid of [feeling] or [illegible], & can be [poked] & talked to without feeling it & merely filed along. Then their morale is [page 5] either made anew or broken. The physical or recreation directors must do anything to make them at home from chopping wood for warmth, sweeping floors Etc. but primarily must organize places for play wherever they can be put and get the men to playing in the whatever way is possible. Heretofore they claim the Allies have not paid much attention to that but since they have, the response of the men has been so great & the morale so changed, that they consider it plain that it must be done all around. If a man can be made to laugh or smile again in any way, he is soon a new man again and that is up to us. They say that in these billeting areas our material will be mostly made ourselves, nothing will be organized & so it is simply up to the men. We are all eager to be at it and are all praying for strength to do it right. Pray for me My Dear, for it is all new to me & I shall need it. If we cannot all go on the boat, at least all physical directors will go whose passports are ready and that is why they so suddenly called me in California after so much procrastination. They decided I would make one & the need [page 6] was so great they were willing to take a chance on most of us & here we are.

We were at Garden City, L.I. for a few days -- the physical directors -- at a beautiful hotel & had some wonderful times. Then we all came up here to Princeton with the rest of the bunch of about 300 and are learning French & being inspired mostly. [We] have French twice a day for an hour each. Wed we go to New York again & prepare for the final plunge.

Now about myself & about you. As you know I went into this thing with the backing of Myra, because I could stay out no longer as [illegible] -- I felt sure in my own mind that even my small contribution was needed. I have always tried to be true to your teachings & to Myra's love & belief by being true to my own best instincts. I would never have felt that I had been true to those instincts if I had not come & therefore neither you nor Myra would have loved and respected me so much as you will now that I have done what may be wrong in Gods sight, but is right according to my conceptions of what God, Myra & you want. Therefore if anything happens to me, it will be of course a matter for rejoicing that I followed my best instincts to the bitter end and a matter of knowledge that it is Gods will. I expect to come back a better man and one more able to do for you & Myra & Jane the things that [page 7] an example alone can do, -- the things you have all been doing for me all of my life. Myra bears the brunt of it if I do not come back, but you must remember my plea that Myra would not want me to not do it since I am convinced it is what I should do, and so she will always be happy in that thought, -- happier than any actual presence without that inspiration could ever make her. I am not doing much, for I am merely following out the inner dictates that won't take no for an answer. Myra is doing much, because she is giving her all, not because she is convinced it is best, but because she is sure that I am convinced that it is best. She has been a wonderful wife to me My Dear, a very wonderful wife in the [sunniness?], and joy of her nature that always overlays the brains, heart and bigness of herself. You have helped us always, have helped me always & I know will continue to watch over Myra, spiritually if the break comes, as well as other ways. Spiritually she will need the most help, & please remember that fact. God grant that I come back safe [page 8] for the sake of Myra, of Jane & of you, but most particularly for the sake of Myra.

I have said little lately My Dear when you have helped us so financially and with the inspiration of yourself. Do not think for a moment that I have not seen you unconvinced that I should go, and yet loyally backing me just as Myra has done, for I have seen it. I have seen it, and I have noted it, and I love you even more if that were possible for it. Miss Smiths quiet true womanhood & motherhood has also always been an inspiration to me & is now to Myra since she knows her, and I want Miss Smith to know it. If I come back safe, please help Esther every time you think of me. I was very much impressed with Esthers [illegible] & ↑with↓ the possibilities of her children. I know she could not navigate without your help, but if I come back safe, I would like now to say as I probably won't feel free to say then, whenever you think of helping us in any way, -- do it to Esther instead & make us happier. If I don't come back, Myra will need all the help anyone can give her in all ways & when I consider help I mean particularly from your inspiration direct & personal.

I am coming back safe My Mother & don't you worry. With all the love in the world and a kiss from me on every breeze that crosses the ocean. Linn explains his preparations to travel to France and the kind of work he will be undertaking there with the Y.M.C.A. He wants his family to know he is following what he feels is right, despite the danger that being in a war zone puts him in.