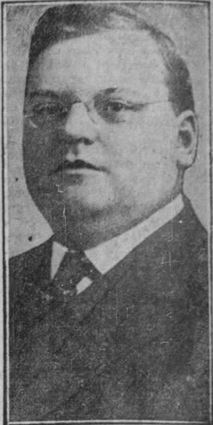 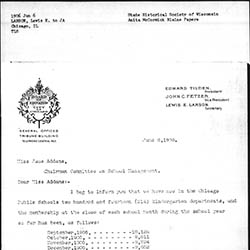 Lewis E. Larson was secretary for the Chicago Board of Education and business manager for the Chicago public schools. He also worked in real estate, as treasurer for the Portage Rubber company, and general manager of Willoughby & Co. Larson went missing in 1923 and was missing for over three years before being found. Larson admitted he had run away due to nerves, traveling from Chicago to St. Louis to Kansas City, and working various jobs. He then went to Dallas, where Larson worked as a salesman for General Motors, then Louisiana where he worked as a truck driver, and then Arkansas where he worked for a paving company. By the time he was found, Larson was working as a superintendent of construction for an asphalt company. After returning to Illinois, Larson worked for H. C. Speer & Son, an investment and bond company.

Larson married Mary Wildman in 1897. They had two children together. Larson died in 1953.