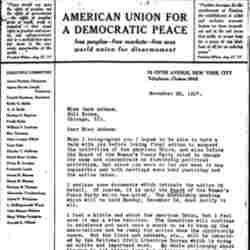 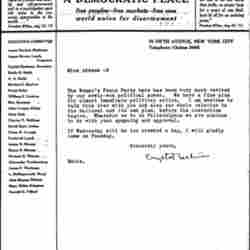 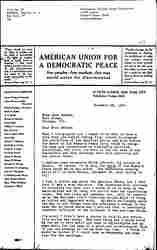 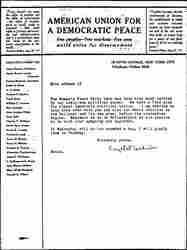 AMERICAN UNION FOR A DEMOCRATIC PEACE

When I telegraphed you I hoped to be able to have a talk with you before taking final action to suspend the activities of the American Union, and also before the Board of the Woman's Peace Party voted to change its name and concentrate on distinctly political activities, but since you were so far out west it was impossible and both meetings were held yesterday and the action taken.

I enclose some documents which indicate the action in detail. Of course, it is only the Board of the Woman's Peace Party which has acted. The Membership meeting which will be held Monday, December 3d, must ratify it all.

I feel a little sad about the American Union, but I feel sure it was a wise decision. The Committee will continue in existence and meet once a month so as to keep up the associations and be ready for action when the opportunity comes. But the lists and members, etc., will be inherited by the National Civil Liberties Bureau which is doing an active and important work. My whole philosophy about the way to get things done has undergone a change in the last two or three weeks and I suppose that is inevitably somewhat reflected in the fortunes of the American Union.

I'm sorry I didn't have a chance to talk to you before this action was taken. The best thing now I think would be for me to wait until you come to Philadelphia and go down early for the sake of a quiet and uninterrupted talk if you can arrange to let me have the time. I think it would be better if I could come on Wednesday and stay over for the meetings. [page 2]

The Woman's Peace Party here has been very much revived by our newly-won political power. We have a fine plan for almost immediate political action. I am anxious to talk this over with you and also our whole relation to the National and its own plan, before the convention begins. Whatever we do in Philadelphia we are anxious to do with your sympathy and approval.

If Wednesday will be too crowded a day, I will gladly come on Tuesday.

Bureau of the Maintenance of Civil Liberties of the American Union

Eastman describes new organizational changes to the American Union and requests a meeting with Addams before the upcoming Woman's Peace Party meeting in Philadelphia.