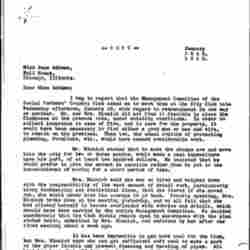 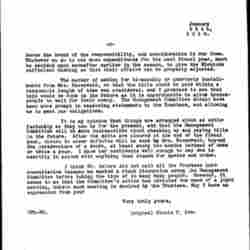 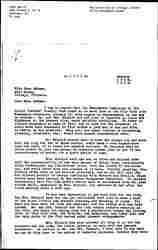 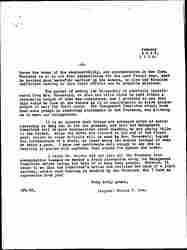 I beg to report that the Management Committee of the Social Workers' Country Club asked me to meet them at the City Club late Wednesday afternoon, January 23, with regard to retrenchment in one way or another. Mr. and Mrs. Minnick did not find it feasible to close the Clubhouse at the present time, under existing conditions. In order to collect insurance in case of fire, and to care for the property, it would have been necessary to find either a good man or man and wife, to remain on the premises. Then too, the usual routine of protecting plumbing, furniture, etc., would have caused considerable work.

Mr. Minnick stated that to make the change now and move into the city for two or three months, would mean a cash expenditure upon his part, of at least two hundred dollars. He insisted that he would prefer to give the amount in question rather than be put to the inconvenience of moving for a short period of time.

Mrs. Minnick said she was so tired and weighed down with the responsibility of the vast amount of detail work, particularly along bookkeeping and statistical lines, that she feared if she moved out, she would never have the courage to go back. Frankly speaking, Mrs. Minnick broke down at the meeting yesterday, and we all felt that she had allowed herself to become overloaded with worries and details, which should have been carried by the entire Management Committee. We decided unanimously that the Club should remain open in accordance with the plan stated below, submitted by Mrs. Minnick, and enforced by her after our first meeting about a week ago.

It has been impossible to get hard coal for the Club, but Mrs. Minnick says she can get sufficient soft coal to make a part of the place livable and prevent freezing and bursting of pipes. All heat has been shut off from the bedrooms, and the living room has been closed. Mr. and Mrs. Minnick and the four social workers residing at the Club, are using the dining room for a combination dining and sitting room, so that this room, the kitchen, the bathrooms, and lower hall are the only parts of the Club heated under present arrangements.

Mrs. Minnick has also allowed all help to go but the houseman and the cook, the latter agreeing to help with the general housework. In justice to Mr. and Mrs. Minnick, I feel this is the best we can do this year in the matter of reducing expenses, because they have [page 2] borne the brunt of the responsibility, and consideration is due them. Whatever we do to cut down expenditures for the next fiscal year, must be decided upon hereafter earlier in the season, to give the Minnicks sufficient warning so that their affairs can be properly adjusted.

The matter of asking for [bimonthly] or quarterly installments from Mrs. Rosenwald, so that the bills could be paid within a reasonable length of time was considered, and I promised to see that this would be done in the future as it is unpardonable to allow tradespeople to wait for their money. The Management Committee should have been more prompt in rendering statements to the Trustees, and allowing us to meet our obligations.

It is my opinion that things are arranged about as satisfactorily as they can be for the present, and that the Management Committee will be more businesslike about checking up and paying bills in the future. After the debts are cleared at the end of the fiscal year, checks to cover deficits will be sent by Mrs. Rosenwald, beyond the peradventure of a doubt, at least every two months instead of once or twice a year. I know her sentiments well enough to say she is heartily in accord with anything that stands for system and order.

I think Mr. [Akers] did not call all the Trustees into consultation because he wanted a frank discussion among the Management Committee before taking the time of so many busy people. However, it seems to me that the Committee's action has obviated the need of a joint meeting, unless such meeting is desired by the Trustees. May I have an expression from you? 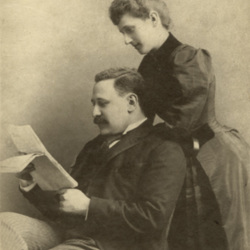 Low informs Addams of steps being taken to minimize expenditures regarding the Social Workers' Country Club.