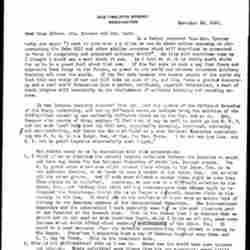 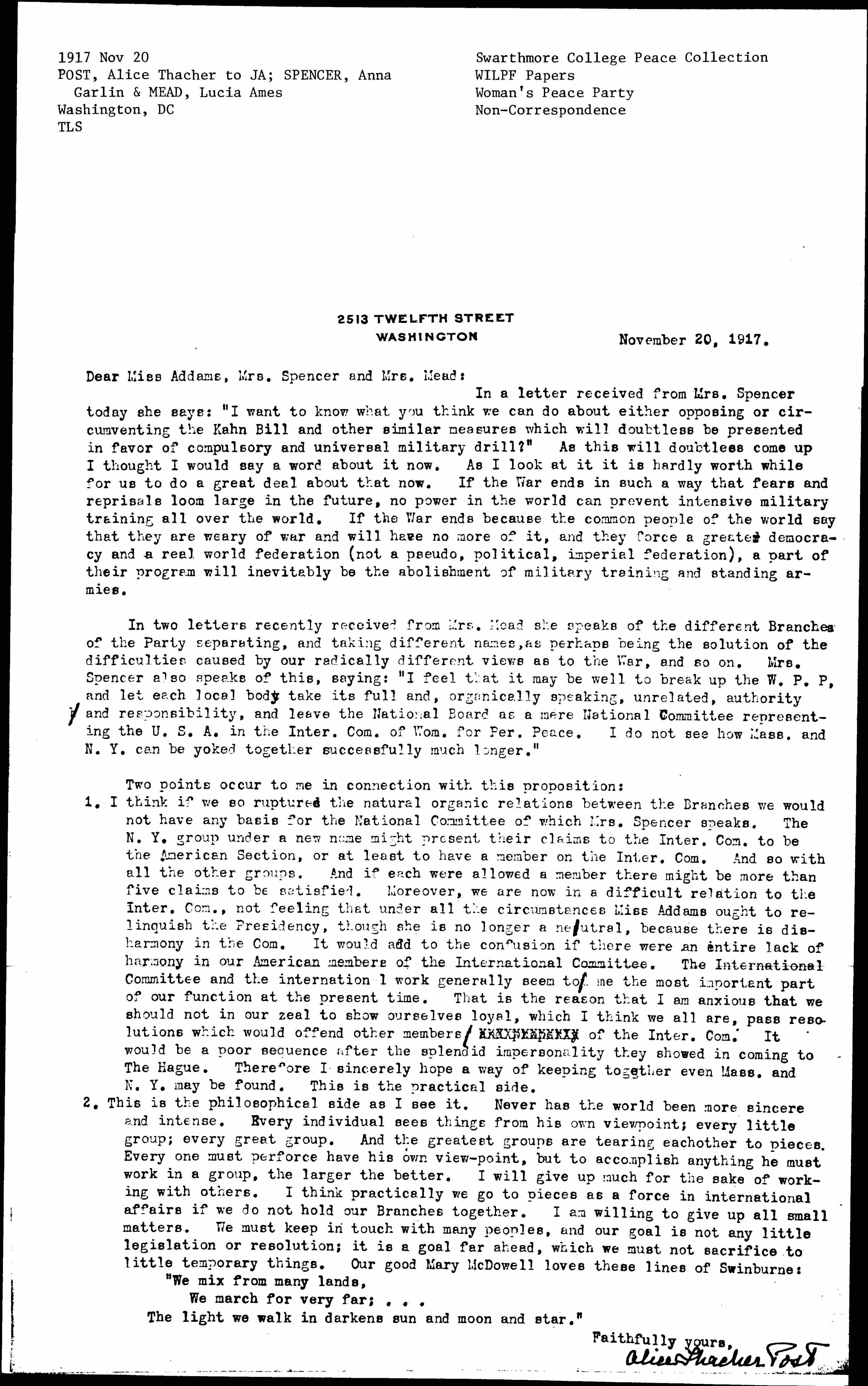 In a letter received from Mrs. Spencer today she says: "I want to know what you think we can do about either opposing or circumventing the Kahn Bill and other similar measures which will doubtless be presented in favor of compulsory and universal military drill?" As this will doubtless come up I thought I would say a word about it now. As I look at it it is hardly worthwhile for us to do a great deal about that now. If the War ends in such a way that fears and reprisals loom large in the future, no power in the world can prevent intensive military training all over the world. If the War ends because the common people of the world say that they are weary of war and will have no more of it, and they force a greater democracy and a real world federation (not a pseudo, political, imperial federation), a part of their program will inevitably be the abolishment of military training and standing armies.

In two letters recently received from Mrs. Mead she speaks of the different Branches of the Party separating, and taking different names, as perhaps being the solution of the difficulties caused by our radically different views as to the War, and so on. Mrs. Spencer also speaks of this, saying: "I feel that it may be well to break up the W.P.P., and let each local body take its full and, organically speaking, unrelated, authority and responsibility, and leave the National Board as a mere National Committee representing the U.S.A. in the Inter. Com. of Wom. for Per. Peace. I do not see how Mass. and N.Y. can be yoked together successfully much longer."

Two points occur to me in connection with this proposition:

1. I think if we so ruptured the natural organic relations between the Branches we would not have any basis for the National Committee of which Mrs. Spencer speaks. The N.Y. group under a new name might present their claims to the Inter. Com. to be the American Section, or at least to have a member on the Inter. Com. And so with all the other groups. And if each were allowed a member there might be more than five claims to be satisfied. Moreover, we are now in a difficult relation to the Inter. Com., not feeling that under all the circumstances Miss Addams ought to relinquish the Presidency, though she is no long a neutral, because there is disharmony in the Com. It would add to the confusion if there were an entire lack of harmony in our American members of the International Committee. The International Committee and the international work generally seems to me the most important part of our function at the present time. That is the reason that I am anxious that we should not in our zeal to show ourselves loyal, which I think we all are, pass resolutions which would offend other members and property of the Inter. Com. It would be a poor sequence after the splendid impersonality they showed in coming to The Hague. Therefore I sincerely hope a way of keeping together even Mass. and N.Y. may be found. This is the practical side.

2. This is the philosophical side as I see it. Never has the world been more sincere and intense. Every individual sees things from his own viewpoint; every little group; every great group. And the greatest groups are tearing each other to pieces. Every one must perforce have his own [viewpoint], but to accomplish anything he must work in a group, the larger the better. I will give up much for the sake of working with others. I think practically we go to pieces as a force in international affairs if we do not hold our Branches together. I am willing to give up all small matters. We must keep in touch with many peoples, and our goal is not any little legislation or resolution; it is a goal far ahead, which we must not sacrifice to little temporary things. our good Mary McDowell love these lines of Swinburne:

"We mix from many lands,
We march for very far; ...
The light we walk in darkens sun and moon and star."