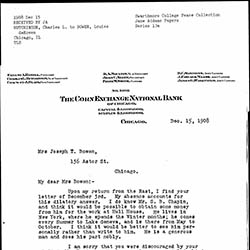 Edward E. Ayer attended Harvard's first school. When he was nineteen he moved to Silver City, Nevada, where he worked at a quartz mine, and then he moved to San Francisco, where he worked at a saw mill. During the Civil War, Ayer enlisted in the First California Cavalry Volunteers. In 1864 he received a third share of his father's general store. While serving in the Civil War, Ayer found a copy of Prescott’s History of the Conquest of Mexico, which began his interest in book collecting. He went on to have a massive collection of books and manuscripts on Native Americans and colonial America. In 1892 he became a charter trustee of Chicago's Newberry Library, and in 1897 he began to donate to the library, though it took until 1911 to complete the donations because his collection was so large; about 50,000 pieces were donated. Ayer was also a benefactor of the Field Museum of Natural History and served as its first president.

Ayer married Emma Augusta Burbank 1865. They had one child together, named Elizabeth. Ayer died in 1927.