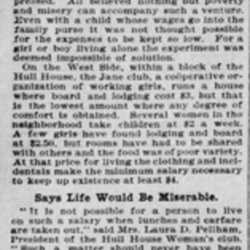 Mrs. Laura D. Pelham Says Even the Discussion Is Dangerous and Never Should Have Been Broached -- Miss Jane Addams Declares That Health Would Be Undermined and a Decent Appearance Could Not Be Maintained -- Woman's Club News.

Living on $2.50 a week is not considered possible by those interested in settlement work. At the Hull House those in charge were a unit in decrying an attempt to experiment with so dangerous a subject. At the other settlements the same views were expressed. All believed nothing but poverty and misery can accompany such a venture. Even with a child whose wages go into the family purse it was not thought possible for the expenses to be kept so low. For a girl or boy living alone the experiment was deemed impossible of solution.

On the West Side, within a block of the Hull House, the Jane Club, a [cooperative] organization of working girls, runs a house where board and lodging cost $3, but that is the lowest amount where any degree of comfort is obtained. Several women in the neighborhood take children at $2 a week. A few girls have found lodging and board at $2.50, but rooms have had to be shared with others and the food was of poor variety. At that price for living the clothing and incidentals make the minimum salary necessary to keep up existence at least $4.

Says Life Would Be Miserable.

"It is not possible for a person to live on such a salary when lunches and carfare are taken out," said Mrs. Laura D. Pelham, President of the Hull House Woman's Club. "Such a matter should never have been broached. A girl cannot live unless she has other means of support. A life at that wage would be misery and shame. It is brutal for employers to take up such a matter for consideration and foolish for others to debate it. I do not know so much about boys, but a girl must have more than that. Her clothing is not durable and she needs constant changes. Her shoes are a good sample. They are light and wear out fast -- a boy's do not. I am perfectly astonished that women should advocate such a thing. None of us would."

"Such a wage is not sufficient for clothing," said Miss Jane Addams. "Only children get it, and even when their living is paid out of the family purse their expenses are more than their income. It is easy to make out such lists, but they do not hold in reality. Away from home such living would not be endurable. One could not keep her health and a decent appearance. As it is, many of the girls go to the factories instead of to the big stores, so as to save on the expense of clothing, and then have a hard time to keep up." 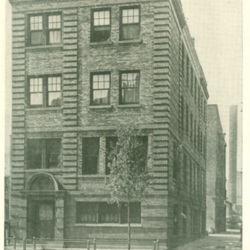 Women argue against setting a weekly salary of $2,50 because it was not sufficient to health and well-being.