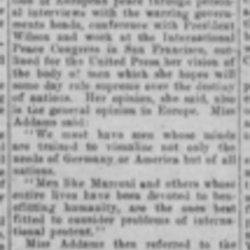 Jane Addams Thinks Diplomats Not Fitted To Settle the War

"I am not disparaging members of the various diplomatic corps when I say that they are not fitted for positions on a commission to settle wars, for their minds have been trained to consider problems from the point of view of their own countries. We must have men whose minds are trained to visualize the needs of all nations.

Chicago, Oct. 23. -- Broadminded men of great mental attainments whose lives have been devoted to the betterment of humanity, are the men Jane Addams would have upon the world's peace commission in place of diplomats and international lawyers.

Miss Addams, whose chief work for the last year has been the promulgation of European peace through personal interviews with the warring governments heads, conference with President Wilson and work at the International Peace Congress in San Francisco, outlined for the United Press her vision of the body of men which she hopes will some day rule supreme over the destiny of nations. Her opinion, she said, also is the general opinion in Europe. Miss Addams said:

"We must have men whose minds are trained to visualize not only the needs of Germany or America but of all nations.

"Men like Marconi and others whose entire lives have been devoted to benefitting humanity, are the ones best fitted to consider problems of international [portent]."

Miss Addams then referred to the diplomats and continued:

"When universal peace is attained, it will not be through the medium of men whose lives have been devoted to professional war making.

"The geniuses of every country, the scientists and men of commercial attainments, could be selected and to them delegated the power of the settlement of international disputes. These men would be broad enough to grasp the needs of every nation and unselfish enough to act in the interests of all peoples.

"Future generations would benefit by the work of such a body as this. The high ideals and nobleness of purpose concentrated in the commission would be reflected throughout the world.

"Reports of my recent utterances regarding diplomacy and diplomats have been misinterpreted. It is not my intention to 'slam' these government agents. But it is my firm belief that the old days of secret diplomatic conferences with each government seeking through its representative to gain selfish ends should come to an end to be replaced by singleness of purpose to benefit all mankind through universal peace." 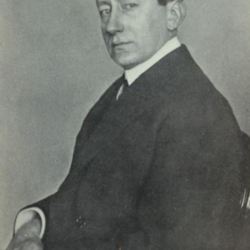 Addams gives a statement clarifying her argument that diplomats are not the best people to negotiate the end of wars.