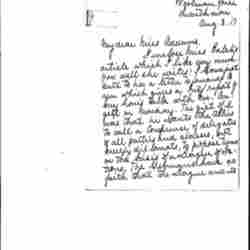 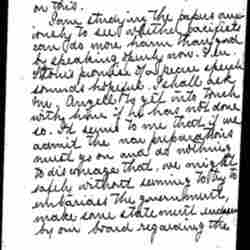 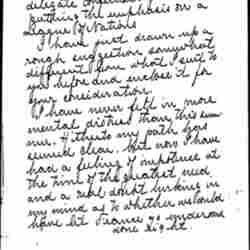 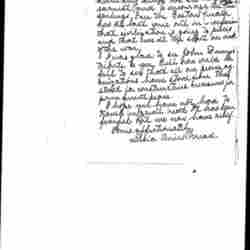 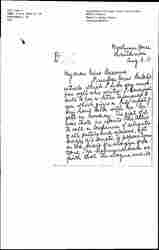 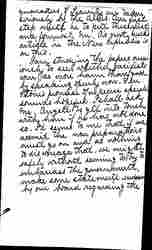 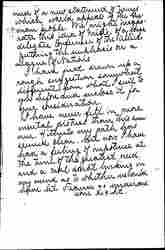 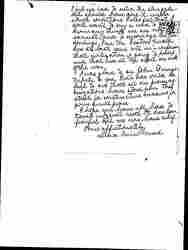 I enclose Miss Balch's article which I like very much. How well she writes! I have just sent to her a letter to forward to you which gives a brief report of my hour's talk with Mr. Angell on Monday. The gist of it was that he wants the Allies to call a Conference of delegates of all parties and classes, not merely diplomats, to propose terms on the basis of a League of Nations. The Germans have no faith that the League and its [page 2] guarantees of Security are taken seriously by the Allies. Our first step must be to put these first and foremost. Mr. A's next week's article in the New Republic is on this.

I am studying the papers anxiously to see whether pacifists can do more harm than good by speaking openly now. Sen. Stone's promise of a peace speech sounds hopeful. I shall ask Mr. Angell to get into touch with him if he has not done so. It seems to me that if we admit the war preparations must go on and do nothing to discourage that, we might safely without seeming to try to embarrass the government, make some statement [enclosed] by our board regarding the [page 3] need of a new statement of terms which would appeal to the German people. We might incorporate this idea of [illegible] of a large delegate Conference of the Allies putting the emphasis on a League of Nations.

I have just drawn up a rough suggestion somewhat different from what I sent to you before and enclose it for your consideration.

I have never felt in more mental distress than this summer. Hitherto my path has seemed clear, but now I have had a feeling of importance at the time of the greatest need and a real doubt lurking in my mind as to whether we could have let France go under and done right. [page 4] I feel we had to enter the struggle but should have done it under strict conditions. I also feel that I don't want to say a word to make Germany think we are not in earnest and to encourage the Hindenburgs. I see the Boston Herald has at last come out in a confession that civilization is going to pieces and that we at the start are sick of the war.

I was glad to see John Dewey's tribute to you. But how could he fail to see that all our peace organizations have stood from the start for constructive measures for permanent peace.

I hope you have not had to travel in great heat. It has been fearful but we now have relief. 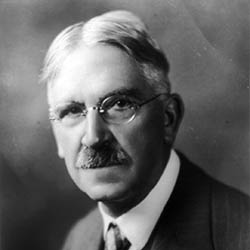 Mead discusses her recent meeting with Norman Angell, efforts to broker a peace conference, and her concerns that peace efforts will fail.

The enclosed article was not found.