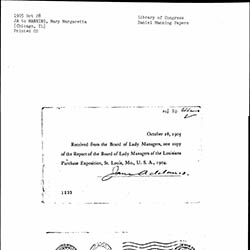 Mary Margaret Manning was the President of the Board of Lady Managers of the Louisiana Purchase Exposition. She was also president of the Daughters of the American Revolution, and the only woman involved in deliberations of the United States Commission to the Paris Exposition. She was awarded the Legion of Honor for creating a hospital corps of women during the Spanish-American War.