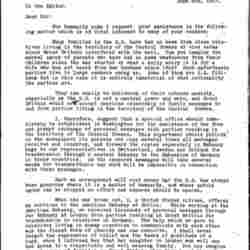 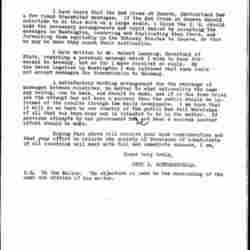 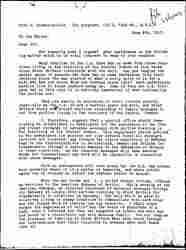 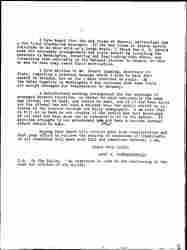 For humanity sake I request your assistance in the following matter which is of vital interest to many of your readers:

Many families in the U.S. have had no news from close relatives living in the territory of the Central Powers or vice versa since Great Britain interfered with the mail. Can you imagine the mental agony of parents who have had no news whatsoever from their children since the war started or what a daily worry it is for a wife who has not heard from her husband since 1914? Such unfortunate parties live in large numbers among us. Some of them are U.S. Citizens but in this case it is entirely immaterial of what nationality the parties are.

They can easily be delivered of their intense anxiety, especially as the U.S. is not a neutral power any more, and Great Britain would now accept American censorship of family messages to and from parties living in the territory of the Central Powers.

I, therefore, suggest that a special office should immediately be established in Washington for the assistance of the free and prompt exchange of personal messages with parties residing in the territory of the Central Powers. This department should publish in the newspapers its purpose and copy several times all messages received and censored, and forward the copies separately in Embassy bags to our representatives in Switzerland, Sweden and Holland for transmission through a neutral Embassy to the Embassies of Germany in these countries. As the censored messages will take several weeks for transmittance spy work will be impossible in connection with these messages.

Such an arrangement will cost money but the U.S. has always been generous where it is a matter of humanity, and where untold agony can be stopped no effort and expense should be spared.

When the war broke out, I, a United States citizen, offered my services to the American Embassy at Berlin. While working at the American Embassy, we received thousands of personal messages through our Embassy at London from parties residing in Great Britain for transmission to relatives in Germany. The help which we gave to relatives living in enemy countries to communicate with each other was the finest work of charity one can conceive. I shall never forget the expression of relief and the tears of gratitude of a lady, when I informed her that her daughter in London was well and had moved to a respectable and well meaning family. You can imagine the pleasure of families in Great Britain when they heard through our intermediary that their relatives in Germany were well taken care of. [page 2]

I have heard that the Red Cross at Geneva, Switzerland has a few times [transmitted] messages. If the Red Cross at Geneva should undertake to do this work on a large scale, I think the U.S. should make the necessary arrangements and could assist by accepting the messages in Washington, censoring and duplicating them there, and forwarding them equitably in the Embassy Pouches to Geneva, so that we may be sure they reach their destination.

I have written to Mr. Robert Lansing, Secretary of State, regarding a personal message which I wish to have forwarded to Germany, but so far I have received no reply. By the Swiss Legation in Washington I was informed that same could not accept messages for transmission to Germany.

A satisfactory working arrangement for the exchange of messages between relatives, no matter to what nationality the same may belong, can be made, and should be made, and if it has been tried and the attempt has not been a success then the public should be informed of the results through the daily newspapers. I am sure that it will do no harm to our country if the public has full knowledge of all that has been done and is intended to do in the matter. If previous attempts by our government have been a success another effort should be made.

Hoping that above will receive your kind consideration and that your effort to relieve the anxiety of thousands of inhabitants of all countries will meet with full and immediate success, I am,

P.S. To the Editor: "No objection is made to the mentioning of the name and address of the writer." 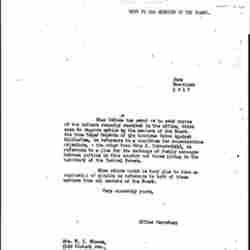 Eleanor Daggett Karsten to the Board of Directors of the Woman's Peace Party, June 20, 1917

Schwarzschild writes to newspaper editors proposing an office to help exchange messages between Americans and their relatives living in the Central Powers.

Schwarzchild's letter was published in at least one newspaper, see the Buffalo Times, June 7, 1917, p. 12.