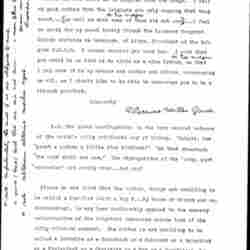 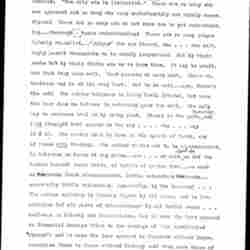 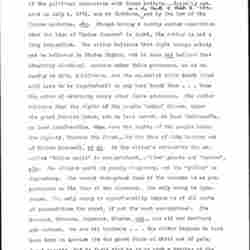 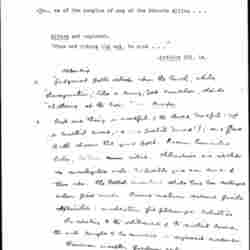 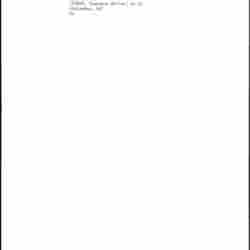 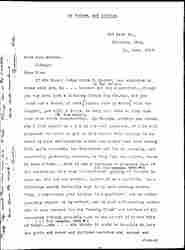 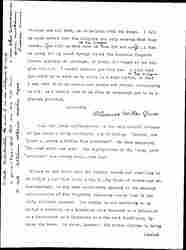 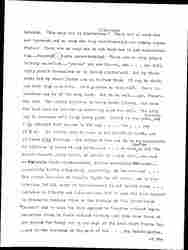 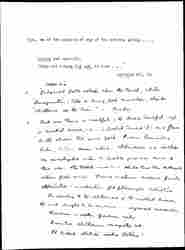 If His Honor, Judge Orrin [N.] Carter, has concluded to break with you, be ... because you are a pacifist[1] , -- though you may have lost a lifelong friend (by-the-bye, did you ever eat a bushel of salt {common salt or Attic} with the Judge?), you will, I trust, be very well able to find much more than ample compensation[2]. By-the-bye, perhaps one reason why I find myself so ready (so well prepared, if I am well prepared) to write to you in this strain this morning is because my good well-meaning mother and sister have been making life quite miserable for themselves and for me recently, and especially yesterday, because, as they say, or, anyhow, words to that effect, -- that it has a tendency to disgrace them in the estimation of a smug "respectable" coterie[3] of friends to have me, the son and brother, spoken of as a pacifist. Some frivolous social butterfly says to my well-meaning sister, "Why, I understand your brother is a pacifist", and my sister promptly reports to my mother, and my good well-meaning mother who is very anxious for the "safety first" and welfare of all concerned (though possibly more in the spirit of Martha than of Mary),[4] -- who ... who thinks it would be horrible to have our girls and women and children ravaged and maimed and [page 2] starved and all that, as in Belgium (and the Congo. I tell my good mother that the Belgians are only reaping what they sowed, -- {as well as what some of them did not sow})[5] -- I feel so sorry for my sweet lovely friend the Baroness Margaret Louise Adelaide de Laveleye, of Liege, President of the Belgian W.C.T.U. I wonder whether you know her. I wish that you would be so kind as to write me a nice letter,[6] so that I may show it to my mother and sister and others, encouraging us all, as I should like to be able to encourage you to be a staunch pacifist.

P.S. The great conflagration is the very natural outcome of the world's silly artificial way of living. "Behold, how great a matter a little fire kindleth!" "He that observeth the wind shall not sow." The objurgations of the "smug, pert counselor" are mostly wind, -- hot air!

Please do not think that the writer, though not unwilling to be called a Pacifist (with a big P, -- by those of wisdom and understanding), is any less unalterably opposed to the summary extermination of the frightful submarine menace (and of the silly aviation menace). The writer is not unwilling to be called a Catholic or a Socialist or a Democrat or a Scientist or a Protestant or a Christian or a Man or a Republican, by those who know. In short, however, the writer objects to being [page 3] labeled "The only sin is limitation." <(-- Emerson)> There are so many who are ignorant and so many who very unfortunately are unduly superficial! There are so many who do not know how to get understanding, -- thorough basic understanding! There are so many judges falsely so-called, -- "judges" who are biased, who ... who willingly permit themselves to be unduly prejudiced! Not by their roots but by their fruits are we to know them. It may be admitted that they mean well. Most persons do mean well. Their intentions may be of the very best. But to do well, -- aye, there's the rub! The writer believes in being truly liberal, but none the less does he believe in returning good for evil. The only way to overcome evil is by doing good. Strait is the gate, <however,> and (not straight but) narrow is the way ... -- the ... way (Tâo). The writer aims to live in the Spirit of Truth, and of Peace with Victory. The writer wishes not to be misunderstood. He believes in Peace at any price, -- as ... as much <perhaps> as did the heroic General James Wolfe, of Battle of Quebec fame, -- as much as Nietzsche (much misunderstood, little understood Nietzsche, -- especially little understood, apparently, by the Germans) ... The writer believes in Woman's Rights by all means, and in Prohibition (of all sorts of intemperance) by all lawful means ... believes in Liberty and Independence, but is none the less opposed to Financial Bondage (than to the bondage of "the Established Church") and is none the less opposed to Taxation without Representation (than to Peace without Victory and) than were those of the Boston Tea Party and in the days of the ever-alert Minute Men, -- and to the resuming on the part of the ... the Reactionaries, of the [page 4] of the political connection with Great Britain, -- formally severed on July 4, 1776, and at Yorktown, <and by treaty of Sept. 3, 1783,> and by the law of the Monroe Doctrine, etc. Though having a deeply rooted connection that the idea "Union forever" is right, the writer is not a Tory Federalist. The writer believes that right wrongs nobody and he believes in States Rights, and he does not believe that obtaining electoral success under false pretenses, as so recently in Ohio, California, and the so-called Solid South (that will have to be liquidated!) is any less banal than ... than the crime of obtaining money under false pretenses. The writer believes that the rights of the people "under" Wilson, under the great Promise Maker, are no less sacred, no less inalienable, no less indefeasible, than were the rights of the people under His Majesty, Charles the First, -- in the time of John Hampden and of Oliver Cromwell, et al. In the writer's estimation the so-called "Yellow peril" is non-existent, -- "like" ghosts and "radium", etc. The alleged peril is purely imaginary, and the "yellow" is figmentary. The recent widespread fear of the Germans is as preposterous as the fear of the Japanese. The only enemy is ignorance. The only enemy is superficiality (which is of all sorts of superstition the worst, if not the most commonplace). The Germans, Chinese, Japanese, Hindus, etc., are all our brothers and sisters. We are all brothers ... The writer happens to have been born in America (in the great State of Ohio) and of pale-faced parents, but he feels that he is as much a brother of the dark-skinned Negro, and of the sun-bronzed Indian, and of the South African Boers, and of the very lovable Chinese and Japanese, [page 5] etc., as of the peoples of any of the Entente Allies ...

1. "[Judgment] falls asleep upon the bench, while 'Imagination,' like a smug, pert counselor, stands chattering at the bar." -- Cowper.

In resorting to the arbitrament of the martial sword, the evil sought to be remedied. -- aegrescit medendo.

[5] Unfortunately the most of us are obliged to reach a good (bad) deal that we did not sow ... -- non plus possessionum quam morborum hæredes sumus Jones writes Addams a rambling letter about his views on pacifism.