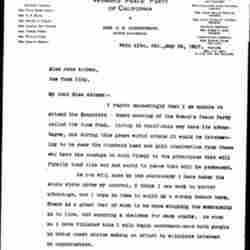 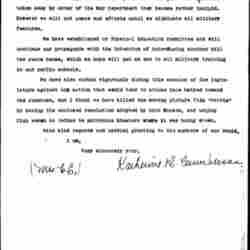 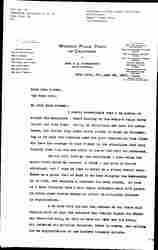 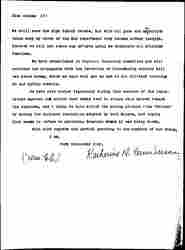 I regret exceedingly that I am unable to attend the Executive Board meeting of the Woman's Peace Party called for June 3[rd]. Living in California may have its advantages, but during this great world crisis it would be interesting to be near the fountain head and gain inspiration from those who have the courage to hold firmly to the principles that will finally lead this war mad world to peace that will be permanent.

As you will note by the [stationery] I have taken the whole state under my control. I think I can work to better advantage, and I hope in time to build up a strong branch here. There is a great deal of work to be done whipping the membership in to line, and securing a chairman for each county. As soon as I have finished this I will begin [correspondence] with people in other coast states making an effort to stimulate interest in organization.

I am sure that you and the members of our Board will rejoice with us that the Governor has finally signed our Physical Education bill, so that we have not only won our point, but defeated all military measures, three in number, one calling for an appropriation of one hundred thousand dollars. [page 2] We still have the High School Cadets, but with all guns and ammunition taken away by order of the War Department they become rather insipid. However we will not cease our efforts until we eliminate all military features.

We have established [our] Physical Education Committee and will continue our propaganda with the intention of introducing another bill two years hence, which we hope will put an end to all military training in our public schools.

We have also worked vigorously during this session of the legislature against any action that would tend to arouse race hatred toward the Japanese, and I think we have killed the moving picture film "Patria" by having the enclosed resolution adopted by both Houses, and urging Club women to refuse to patronize theaters where it was being shown.

With kind regards and cordial greeting to the members of our Board,

Cumberson updates Addams on the work of the California branch of the Woman's Peace Party.

The enclosed resolution was not found.