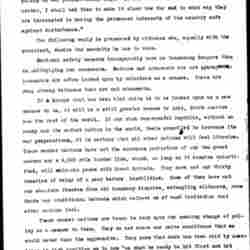 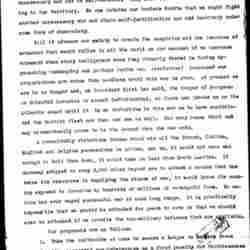 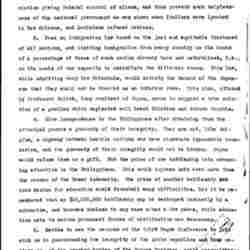 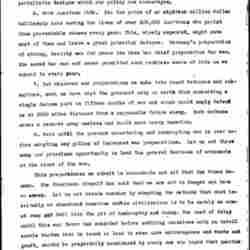 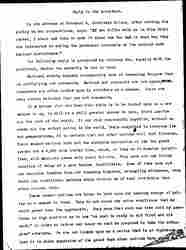 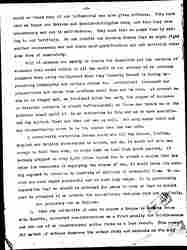 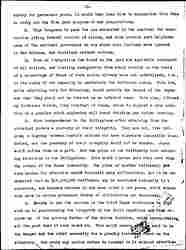 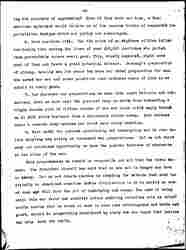 Reply to the President.

In his address on November 4, President Wilson, after stating his policy on war preparations, says: "If men differ with me in this vital matter, I shall ask them to make it clear how far and in what way they are interested in making the permanent interests of the country safe against disturbance."

The following reply is presented by citizens who, equally with the president, desire the security he has in view.

National safety depends incomparably more on lessening dangers than on multiplying our armaments. [Defense] and armaments are not synonymous. Armaments are often looked upon by outsiders as a menace. There are many strong [defenses] that are not armaments.

If a Europe that has been bled white is to be looked upon as a new menace to us, it will be a still greater menace to Asia, South America and the rest of the world. If our rich resourceful republic, without an enemy and the safest nation in the world, feel compelled to increase its war preparations, it is certain that all other nations will feel likewise. These weaker nations have not the enormous protection of our two great oceans and a 4,000 mile border line, which, so long as it remains unfortified, will maintain peace with Great Britain. They have not our thirty treaties of delay of a year before hostilities. Some of them have not our absolute freedom from old boundary disputes, entangling alliances, race feuds and traditional hatreds which relieve us of vast irritation that other nations feel.

These weaker nations are bound to look upon our amazing change of policy as a menace to them. They do not share our naive confidence that we would never take the aggressive. They know that much has been said by Americans in high position as to how "we must be ready to hit first and hit hard," in order to defend our honor we must be prepared to "take the offensive" etcetera. We are not looked upon as a nation that is so righteous that it is above suspicion of the greed that other nations have shown and [page 2] which at times many of our influential men have given evidence. They know that we began our Mexican and Spanish-Philippine wars, and that they were unnecessary and not in self-[defense]. They know that we ended them by adding to our territory. No one outside our borders doubts that we might fight another unnecessary war and claim self-justification and add territory under some form of suzerainty.

Will it advance our safety to create the suspicion and the increase of armament that would follow in all the world on our account if we increase armament when every belligerent whom they formerly feared is facing approaching bankruptcy and perhaps famine and revolution? Increased war preparations are worse than needless until this war is over. At present we are in no danger and, as President Eliot has said, the danger of European or Oriental invasion is almost infinitesimal; no force can invade us on the Atlantic coast until it is so victorious in this war as to have annihilated the British fleet and then our own as well. Our navy ranks third and may automatically prove to be the second when the war ends.

A conceivably victorious German would win all the French, Italian, English and Belgian possessions in Africa, and as, it would not have men enough to hold them down, it could take no land from South America. If Germany shipped an army 3,000 miles beyond sea to attack a nation that has twice its resources in supplying the sinews of war, it would leave its country exposed to invasion by hundreds of millions of revengeful foes. No nation has ever waged successful war at such long range. It is practically impossible that we should be attacked for years to come or that we should ever be attacked if we provide the non-military [defenses] that are available.

Our proposals are as follows:

1. Take the initiative at once to secure a League to Enforce Peace with drastic, concerted non-intercourse as a first penalty for faithlessness and the use of an international police force as a last resort. This powerful method of [defense] deserves the widest study and emphasis as the only [page 3] surety for permanent peace. It would take less time to accomplish this than to carry out the five year program of war preparations.

2. Urge Congress to pass the law advocated by the American Bar Association giving federal control of aliens, and thus prevent such helplessness of the national government as was shown when Italians were lynched in New Orleans, and Louisiana refused redress.

3. Pass an immigration law based on the just and equitable treatment of all nations, and limiting immigration from every country on the basis of a percentage of those of each nation already here and naturalized, i.e., on the basis of our capacity to assimilate the different races. This law, while admitting very few Orientals, would satisfy the demand of the Japanese that they shall not be treated as an inferior race. This plan, offered by Professor Gulick, long resident of Japan, seems to suggest a true solution of a problem which neglected will breed friction and future trouble.

4. Give independence to the Philippines after obtaining from the principal powers a [guarantee] of their integrity. They are not, like Belgium, a highway between hostile nations who have elsewhere impassible boundaries, and the [guarantee] of their integrity would not be broken. Japan would refuse them as a gift. Put the price of one battleship into advancing education in the Philippines. This would impress Asia even more than the return of the Boxer indemnity. The price of another battleship put into Mexico for education would forestall many difficulties. Let it be remembered that an $18,000,000 battleship may be destroyed instantly by a submarine, and become useless in any case after a few years, while education sets in motion permanent forces of civilization and democracy.

5. Decide to ask the nations at the Third Hague Conference to join with us in guaranteeing the integrity of the Latin republics and thus relieve us of the growing burden of the Monroe Doctrine, while accomplishing all the good that it ever aimed at. This would remove what is said to be the danger and the chief necessity for a greatly increased fleet on the Atlantic. How could any nation refuse to consent to it without advertising [page 4] its purposes of aggression? Even if this were not done, a Pan-American agreement would relieve us of the onerous burden of suspected imperialistic designs which our policy now encourages.

6. Save American life. Put the price of an eighteen million dollar battleship into saving the lives of over 600,000 Americans who perish from preventable causes every year. This, wisely expended, might save most of them and leave a great potential [defense]. Germany's preparation of strong, healthy men for peace has been her chief preparation for war. She saved her men and never permitted such reckless waste of life as we submit to every year.

7. Put whatever war preparations we make into coast [defenses] and submarines, such as have kept the greatest navy on earth from bombarding a single German port in fifteen months or war and which could amply defend us at 3000 miles distance from a supposable future enemy. Such defense makes a reserve army useless and would save heavy taxation.

8. Wait until the present devastating and bankrupting war is over before adopting any policy of increased war preparations. Let us not throw away our priceless opportunity to lead the general decrease of armaments at the close of the war.

This preparedness we submit is reasonable and all that the times demand. The President himself has said that we are not in danger and have no enemy. Let us not create enemies by adopting the methods that must inevitably be abandoned sometime unless civilization is to be merely an armed camp and fall into the pit of bankruptcy and decay. The need of delay until this war fever has subsided before saddling ourselves with an intolerable burden that is bound to lead to even more extravagance and waste and graft, should be prayerfully considered by every one who hopes that America may help save the world. 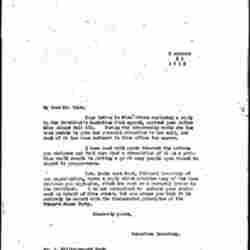 Nasmyth sends a reply to Wilson's recent speech explaining the need for disarmament to perpetuate national safety rather than an increase in war preparation. He offers a list of proposals to ensure peace which focus on strengthening international relations.