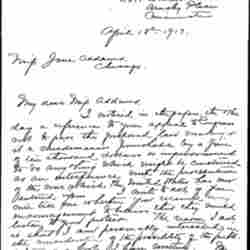 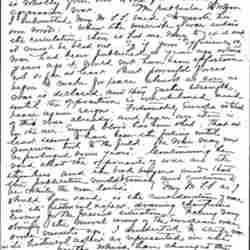 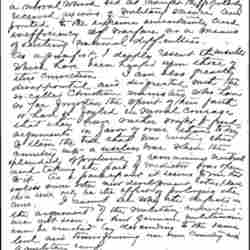 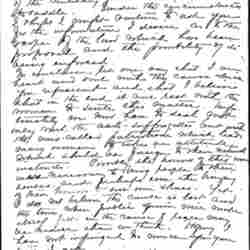 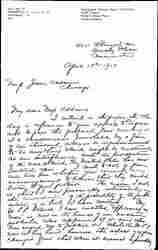 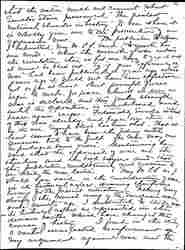 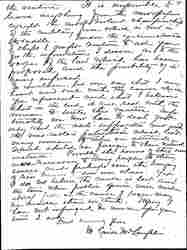 I noticed in the papers, the other day a reference to your appeal to Congress not to pass the proposed law making it a misdemeanor punishable by a fine of ten thousand dollars or imprisonment to do anything which might be construed as an interference with the prosecution of the war which the United States has now entered upon. I wish to ask if you will tell me whether you received any encouragement to believe that they would listen to your protest. The reason I ask is that I am personally interested in the consideration of the possibility of the publication of a book I have written. My M.S.S. which I have entitled "Efficiency vs. War" is now in the hands of an eastern publisher who approves of it and who has urged me to publish it. While the M.S.S. was in his hands, however, the aspect of affairs changed from that where it seemed a possibility [page 2] that the nation would not commit what Senator Stone pronounced "The greatest national blunder in history" to one where it is wholly given over to the prosecution of an aggressive war. The publisher to where I submitted my M.S.S. said, to quote his own words: "where the microbe of war enters the circulation there is but one way to get it out: it must be bled out. So if your 'Efficiency vs. War' had been published a year ago or two years ago it would not have been effective -- not so far at least. But powerful forces begin to make for peace almost as soon as war is declared, and they gather strength, until the opposition is overwhelmed and peace again reigns. Fortunately Europe is tired of this war already, and peace over there is in the air. Enough blood has been shed. That at least seems to have been the feeling until America took to the field. The war may now be prolonged some years". Continuing he said that the opponents of war are the thinkers and the book buyers and that the publication would <be> timely and continue to be while the war lasted. My M.S.S. as I should have said, is the consideration of war in its historical aspect, drawing therefrom lessons for the present situation. Feeling very strongly the moral wrong of the European war, some months ago, I undertook to study war <in> its historical aspect as represented in the decisive [battles] which have changed the course of history. I found in this study a rather unexpected reinforcement of my argument against war and the [page 3] result was that I combined with a condensed story of the historic conflicts referred to a summary of the conditions under which victory had been achieved, drawing therefrom a moral which set as naught the popularly received axioms of military science and pointed to the extreme uncertainty and inefficiency of warfare as a means of settling national difficulties.

As a pacifist, I deeply resent the results which have been heaped upon those of this conviction. I am also greatly disappointed and disgusted with the so-called Christian ministers who have so far forgotten the spirit of their faith or have so failed in moral courage that they have rather sought to find arguments in favor of war than to try to stem the tide that was rushing this country into a useless war, when the splendid opportunity of remaining neutral and taking the part of mediator was open to it. As a participant it seems to me that unless some other new development takes place there will only be the effect of prolonging the war. I cannot see why the defects in the argument of the military contingent are not seen, or how German militarism can be crushed by descending to the same level and transforming our own country [into] a military camp.

With regard to the publication of my book I am not in a position to risk legal prosecution or financial loss in the [page 4] venture. It is impossible to learn anything from the newspapers except the most violent championship of the military force which is now in the saddle. Under the circumstances I thought I might venture to ask you for the information I desire as to the scope of the law which has been proposed and the probability of its being enforced.

In conclusion let me say that I am heart and soul with the cause which you represent and that I believe that in the end it will rest with the women to settle this matter. Unfortunately we now have to deal not only with the anti-suffragettes but with the [miscalled] patriotism which leads many women to take an attitude which should be foreign to their natural instincts. Possibly the horrors of this war were necessary to bring people to their senses and perhaps even the bringing of these horrors to our own [shores]. Yet I do not believe the cause is lost and the time when public opinion will make itself felt in the cause of peace may be nearer than we think. Hoping I have not infringed too much upon your time I am 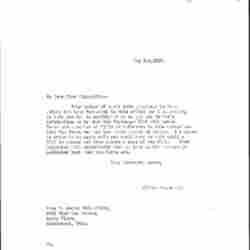 McLaughlin tells Addams about her new book Efficiency vs. War and of her support for the peace movement.