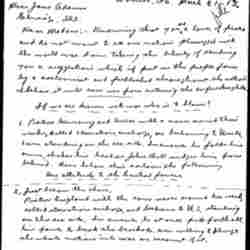 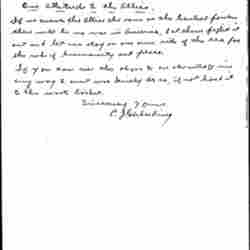 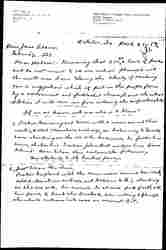 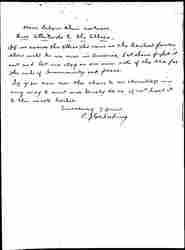 Dear Madam: -- Knowing that you <are> a lover of peace and do not want to see our nation plunged [into] the world war I am taking the liberty of sending you a suggestion which if put in the proper form by a cartoonist and published throughout the nation I believe it will save us from entering the awful slaughter.

If we are drawn with war who is to blame?

1. Picture Germany and Greece with a noose around their necks, called starvation embargo, are beckoning to Uncle Sam standing on the sea side. In answer he folds his arms, shakes his head as John Bull nudges him from behind. Have below this cartoon the following

Our attitude to the Central powers

2. Just below the above.

Picture England with the same noose around her neck, called starvation embargo, and beckons to U.S. standing on the sea side. In answer he at once puts forth all his power to break the blockade, ever willing to plunge the whole nation into war on account of it. [page 2]

Have below the caption

Our attitude to the Allies.

If we answer the Allies the same as the Central powers there will be no war in America. Let them fight it out and let us stay on our own side of the sea for the sake of humanity and peace.

If you can use the above to an advantage in any way to avert war kindly do so, if not hand it to the waste basket.

Gerberding offers Addams his suggestions on how to achieve peace.