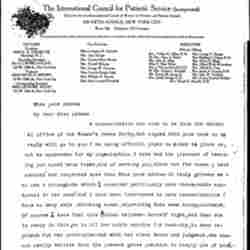 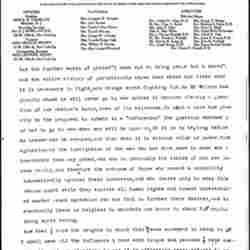 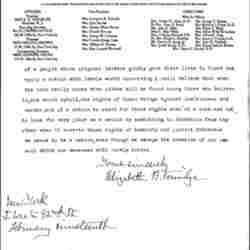 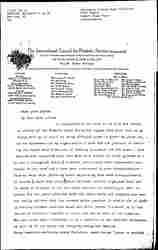 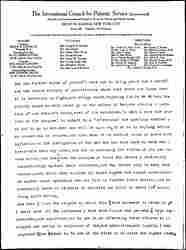 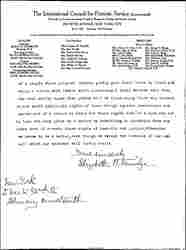 A communication has come to me from the national office of the Woman's Peace Party, but signed with your name so my reply will go to you. I am using official paper in order to place me, not as spokesman for my organization. I have had the pleasure of hearing you speak many times, and of meeting you; there are few women I have admired and respected more than Miss Jane Addams -- it truly grieves me to see a propaganda which I consider [perilously] near treasonable conducted in her name! And I have been interested to note communications from so many calm, thinking women, expressing this same disappointment. Of course I know that Miss Addams believes herself right, and that she is ready in this, as in all her noble service for humanity, to bear reproach for her principles -- but with her clear brain and judgment, she cannot really believe that the present grave question is simply one of kindly feeling between American women and their German "sisters", or of the desire of American tourists to cross the sea -- or even of our commerce. Who can doubt that ultimately it is a question of our national [existence], as well as of our honor and integrity among the nations.

Every American -- certainly every Christian -- must desire "peace on Earth" [page 2] but the further words of Christ "I came not to bring peace but a sword", and the entire history of Christianity shows that there are times when it is necessary to fight, and things worth fighting for. As Mr Wilson has plainly shown he will never go to war unless it becomes clearly a question of our nation's honor, even of its existence. In such a case how [puerile] is the proposal to submit to a "referendum" the question whether or not to go to war -- when war will be upon us, if it is to be, long before an answer can be secured, and then when it is without value or power. Such agitation -- at the instigation of the man who has done more to make war inevitable than any other, and who is obviously the victim of his own insane vanity, and therefore the catspaw of those who resent a neutrality automatically against their interests, and who desire only to keep this nation quiet while they violate all human rights and commit unrestrained murder -- such agitation can not fail to further their desires, and to eventually leave us helpless to maintain our honor to stand for anything worth having.

Now that I know the lengths to which this Peace movement is ready to go I shall use all the influence I have with tongue and pen -- and I have considerable, and opportunities to use it; in offsetting these efforts to cripple our nation in violation of law, and patriotism, and loyalty. I had expected Miss Addams to be one of the first to so voice the higher ideals [page 3] of a people whose original leaders gladly gave their lives to found and equip a nation with ideals worth conserving. I still believe that when the test really comes Miss Addams will be found among those who believe in, and would uphold, the rights of human beings against lawlessness and murder, and of a nation to stand for those rights even at a cost -- and not to lose its very place as a nation by submitting to dictation from any other when it asserts those rights of humanity and justice. Otherwise we cease to be a nation, even though we escape the invasion of our own soil which our weakness will surely invite. 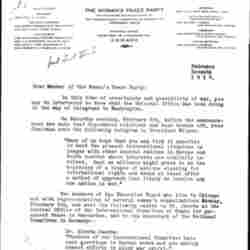 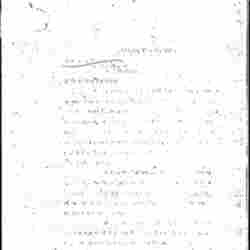 Vermilye criticizes Addams's request for a referendum and explains that there are some times when war is necessary to protect the nation.