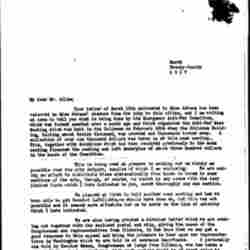 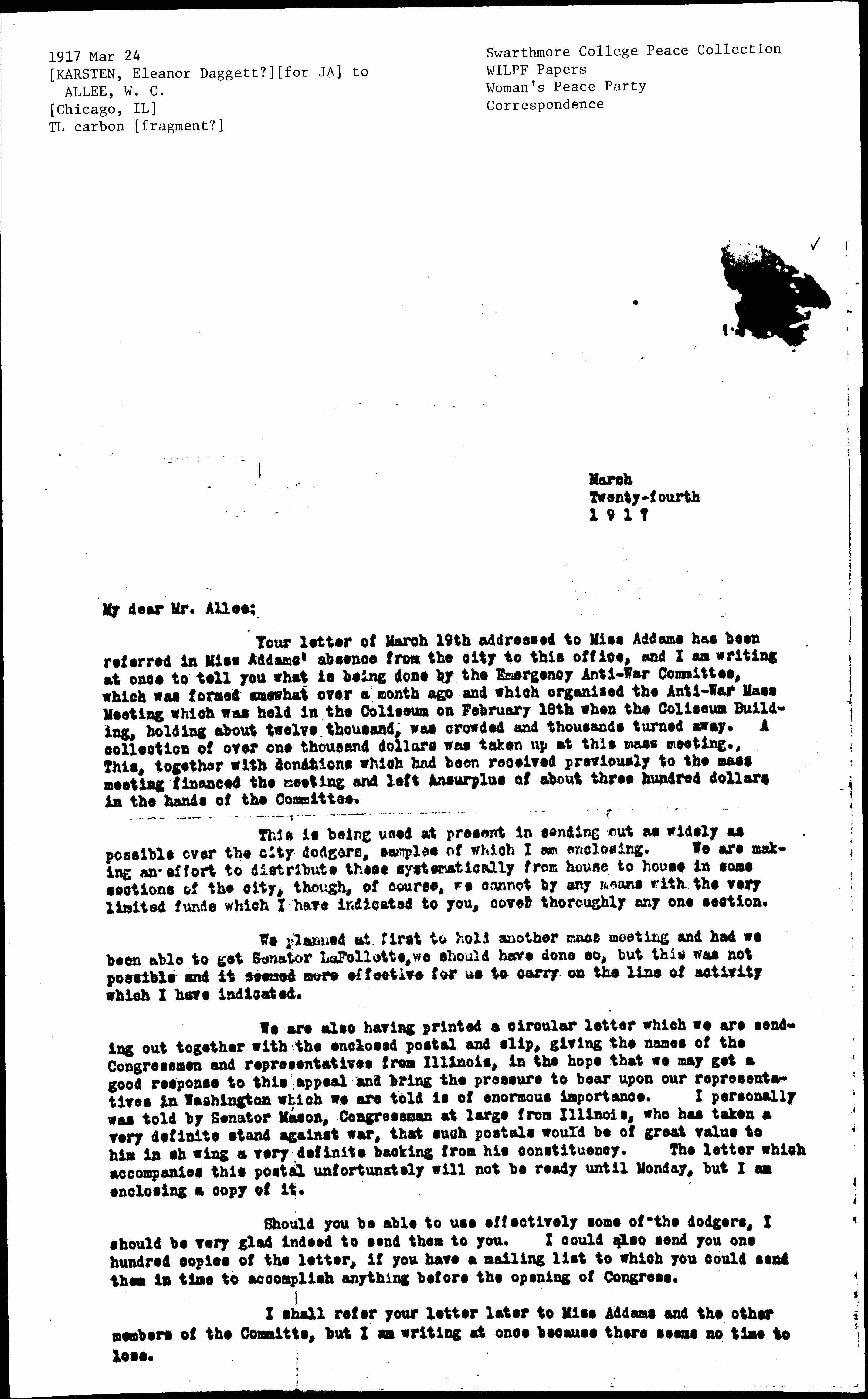 Your letter of March 19th addressed to Miss Addams has been referred in Miss Addams' absence from the city to this office, and I am writing at once to tell you what is being done by the Emergency Anti-War Committee, which was formed somewhat over a month ago and which organized the Anti-War Mass Meeting which was held in the Coliseum on February 18th when the Coliseum Building, holding about twelve thousand, was crowded and thousands turned away. A collection of over one thousand dollars was taken up at this mass meeting. This, together with donations which had been received previously to the mass meeting financed the meeting and left a surplus of about three hundred dollars in the hands of the Committee.

This is being used at present in sending out as widely as possible over the city dodgers, samples of which I am enclosing. We are making an effort to distribute these systematically from house to house in some sections of the city, though, of course, we cannot by any means with the very limited funds which I have indicated to you, cover thoroughly any one section.

We planned at first to hold another mass meeting and had we been able to get Senator La Follette, we should have done so, but this was not possible and it seemed more effective for us to carry of the line of activity which I have indicated.

We are also having printed a circular letter which we are sending out together with the enclosed postal and slip, giving the names of the Congressmen and representatives from Illinois, in the hope that we may get a good response to this appeal and bring the pressure to bear upon our representatives in Washington which we are told is of enormous importance. I personally was told by Senator Mason, Congressman at large from Illinois, who has taken a very definite stand against war, that such postals would be of great value to him in [showing] a very definite backing from his constituency. The letter which accompanies this postal unfortunately will not be ready until Monday, but I am enclosing a copy of it.

Should you be able to use effectively some of the dodgers, I should be very glad indeed to send them to you. I could also send you one hundred copies of the letter, if you have a mailing list to which you could send them in time to accomplish anything before the opening of Congress.

I shall refer your letter later to Miss Addams and the other members of the Committee, but I am writing at once because there seems no time to lose.

Karsten updates Allee on activities of the Emergency Anti-War Committee and efforts to lobby Congress against joining the war.