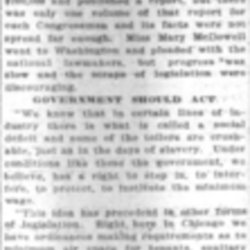 Miss Jane Addams gave a resume of certain features of the Progressive Party program relating to social and industrial justice in a talk at the noon Progressive rally at the Lyric Theater yesterday. She said:

"People like myself for many years have lived in quarters of the city greatly in need of changes. Around us we see men and women compelled to work long hours and many of them all night. We see immigrants out of work, in need, their families suffering.

"Noticing these facts we have based hopes of betterment upon publicity. We have seen where lessons of value could be learned from Germany and from England.

"An immigration commission secured $700,000 and published a report, but there was only one volume of that report for each Congressman and its facts were not spread far enough. Miss Mary McDowell went to Washington and pleaded with the national lawmakers, but progress was slow and the scraps of legislation were discouraging."

"We know that in certain lines of industry there is what is called a social deficit and some of the toilers are crushable, just as in the days of slavery. Under conditions like these the government, we believe, has a right to step in, to interfere, to protect, to institute the minimum wage.

"This idea has precedent in other forms of legislation. Right here in Chicago we have ordinances making requirements as to minimum air space for tenants, sanitary plumbing and so on. If wages are below the standard of sustenance, then life cannot be maintained. The modern day tendency is to conserve life and health.

"In the United States 15,000 are killed yearly by accident and half a million men yearly are injured. Other nations are devoting great attention to the prevention of such accidents. Manufacturers are not cruel, not intentionally careless of the lives and limbs of their employees, but it never has been brought home to them how much might be accomplished by precaution."

"Another group of measures we advocate are those to utilize and free human energy. There is the educational, whose need is shown by the fact that one-half of all the nation's youths leave school with a training that limits them to an earning capacity of $600 a year or less for all their lives.

"Another proposition in our campaign for social and industrial justice is the government laboratory, by which inventions may be saved to the people's general use. The initiative, referendum and recall are to free the people. As to the recall of judicial decisions, a federal Judge recently told me he was sad because modern day judges knew so little law. Chief Justice Marshall was a giant of the bench because his judicial attitude was based fundamentally to help the people's wants. We must bring the judicial arm of the government close to the people."

Addams discusses challenges to social and industrial justice and how the Progressive Party program will help address them. Addams gave the speech at a Progressive rally held at the Lyric Theater.