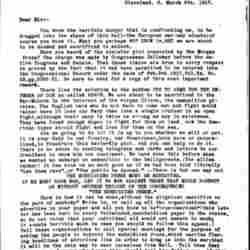 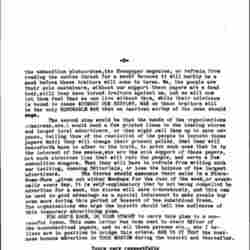 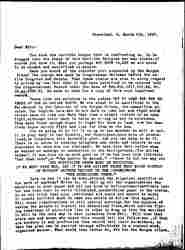 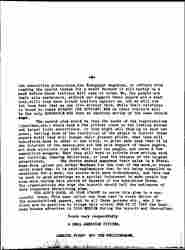 You know the terrible danger that is confronting us, to be dragged into the abyss of this hell -- the European war -- any minute; of course you know it. What you perhaps NOT KNOW is, WHY we are about to be doomed and sacrificed to Moloch.

Have you heard of the sinister plot concocted by the Morgan Press? The charge was made by Congressman Callaway before the entire Congress and Senate. That these claims are true in every respect is proved by the fact that it had been permitted to be entered into the Congressional Record under the date of Feb. 9th. Vol. 54. No. 53. pp. 3320-21. Be sure to send for a copy of this most important record.

There lies the solution to the sudden CRY TO ARMS FOR THE DEFENSE OF OUR so-called HONOR. We are about to be sacrificed to the War-Moloch in the interest of the Morgan Clique, the ammunition pirates. The English rats who do not dare to come out and fight would rather have US lose our Navy than lose a single cruiser in an open fight, although their navy is twice as strong as any in existence. They have found enough dupes to fight for them on land, now the American dupes should fight and lose for them on the sea.

Are we going to do it? It is up to you whether we will or not. It is your duty to our Country, our Countrymen, born here or naturalized, to frustrate this dastardly plot. And you can help to do it. There is no sense in sending telegrams and cards and letters to our President to show him our sentiment. We have done this before when we wanted an embargo on ammunition to the belligerents. (The allies rather) It has done us so much good as if we had been told literally "Let them rave", or "The public be damned." -- There is but one way out

THE SUBSIDIZED PRESS MUST BE BOYCOTTED.

IF WE MUST HAVE WAR, LET IT BE WAR AGAINST THOSE THAT WOULD DESTROY US WITHOUT ANOTHER THOUGHT OF THE CONSEQUENCES

Here is how it can be done, without the slightest sacrifice on the part of anybody. Write to, or call up all the organizations who advertise in your paper and all you know to be "true-American" (this letter has been sent to every fair-minded, unsubsidized paper in the states, so do not think that your individual aid would not amount to much; it counts terrible much in case you should [not] follow this appeal.) Tell these organizations to call special meetings for the purpose of asking the people to boycott the subsidized Press, which carries flaring headlines of atrocious lies in order to drag us into the war; that it will be the only way to save ourselves from Hell. Tell them that every man and woman who hears this should tell his fellow-men, if they are workers in any profession they should tell their [coworkers], so that the plan can be carried through effectively in a concentrated, organized matter. What would they rather do, die for the Morgan clique, [page 2] the ammunition [plutocrats], the Newspaper magnates, or refrain from reading the untrue thrash for a week? Because it will hardly be a week before these traitors will come to terms. We, the people are their sole sustainers, without our support these papers are a dead body, still they have turned traitors against us, and we will now let them feel that we can live without them, while their existence is bound to cease WITHOUT OUR SUPPORT. WAR on these traitors will be the only HONORABLE WAR that an American worthy of the name should wage.

The second step would be that the heads of the organizations (chairman, etc.) would send a few printed lines to the leading stores and larger local advertisers, or they might call them up to save expense, telling them of the resolution of the people to boycott those papers until they will change their present policy, that they will henceforth have to [adhere] to the truth, to print such news that is in the interest of the masses, who are the sole support of these papers, not such atrocious lies that will ruin the people, and serve a few ammunition mongers. That they will have to refrain from writing such war inciting, cunning Editorials, or lose the [business] of the largest advertisers. The Stores should announce their sales in a Store-News-Form, given out either Mondays for the rest of the week, or eventually every day. It is self-explanatory that by not being compelled to advertise for a week, the stores will save tremendously, and this can be used to good advantages as a special inducement to make people buy even more during this period of boycott of the subsidized Press. The organizations who urge the boycott should tell the audiences of this temporary advertising plan.

FOR GOD'S SAKE, DO YOUR UTMOST to carry this plan to a successful issue. This same letter has been sent to every Editor of the nonsubsidized papers, and to all those persons etc., who I believe are in position to bridge this crisis. SEE TO IT THAT the business houses advertise in YOUR MEDIUM during the boycott and thereafter.

AMERICA FIRST -- NOT THE BELLIGERENTS. 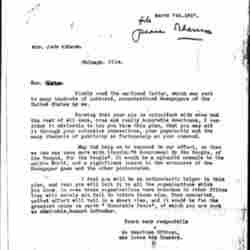 A "Rreal American Citizen" calls for a boycott of subsidized newspapers due to their warmongering.