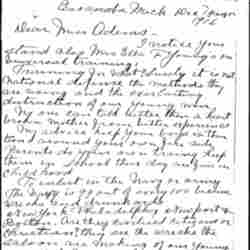 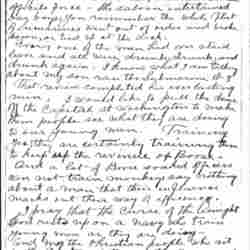 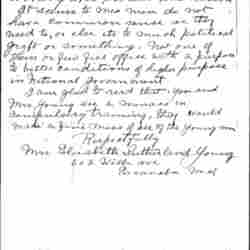 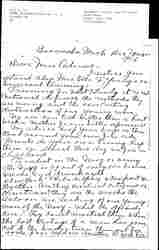 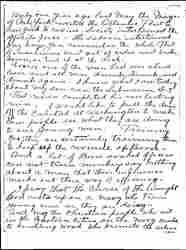 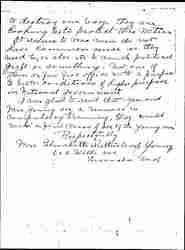 Training for what? Surely it is not national defense the methods they are using and the everlasting destruction of our young men.

No one can talk better than a heart broken mother from bitter experience.

My advice keep your boys in their teens around your own fire side Parents do your own [training] keep them in school their day are few in [childhood].

To [enlist] in the navy or army The navy is 99 out of every 100 become wrecks and drunkards.

New York Philadelphia Newport & Boston. Are they [civilized] citizens or Christian? They see the wrecks the saloon are making of our young men of the navy -- what do officials care. They court martial them when the last [vestige] of a man has gone out of the body -- turn them out for some poor widow mother to care for. [page 2]

Only one year ago last May the Mayor of New York invited the Atlantic Fleet to New York to review. Society [entertained] the [officials'] force -- the saloon [entertained] our boys. You remember the whole fleet of [Submarines] went out of order and broke down, or tied up at the dock.

Every one of the men had [overstayed] leave and all were drunk, drunk, and drunk again. I know what I am talking about my son ran the Submarine D-3.

That review completed his ever lasting ruin. I would like to pull the dome off the [Capitol] at Washington to make them people see what they are doing to our young men. Training yes: they are certainly training them to keep up the [revenue] of [Booze]. And a lot of [Booze-soaked] officers can not train monkeys say nothing about a man that their influence marks out their way of [efficiency].

I pray that the curse of the [Almighty] God rests up on a navy who train young men as they are doing. And may the Christian people who sit in the Eastern cities see the navy [crushed] to kindling wood who [permits] the saloon [page 3] to destroy our boys they are looking to, to protect this nation.

It seems to me men do not have common sense as they used to, or else [it's too] much political graft or something. Not one of them or few fill office with a purpose to better conditions of higher purpose in national government.

I am glad to read that you and Mrs Young see a menace in [compulsory] training, they would make a fine mess of all of the young men.

Young warns Addams about the effects of military training on young men.