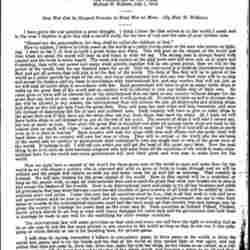 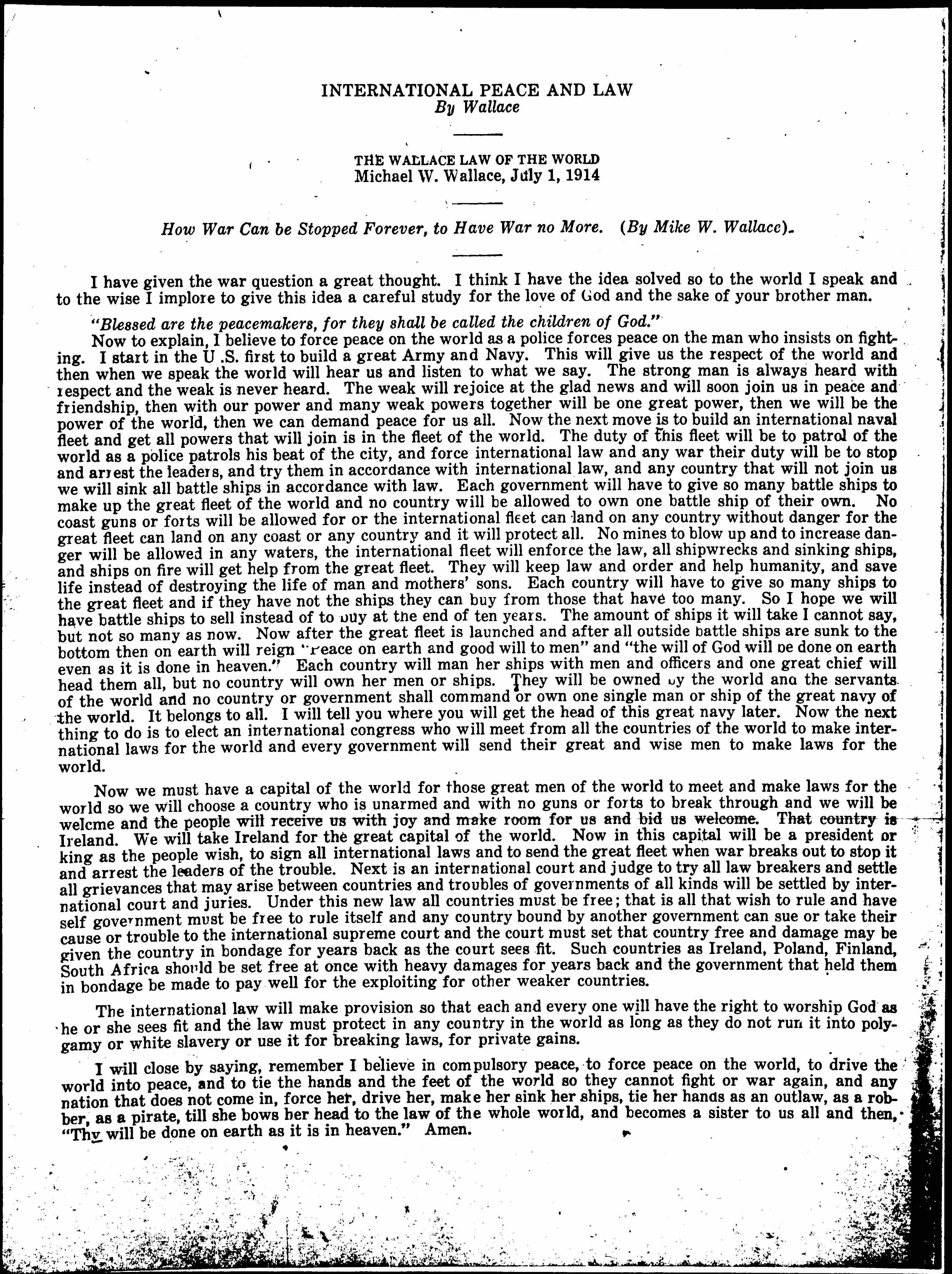 INTERNATIONAL PEACE AND LAW
By Wallace

How War Can be Stopped Forever, to Have War no More. (By Mike W. Wallace).

I have given the war question a great thought. I think I have the idea solved so to the world I speak and to the wise I implore to give this idea a careful study for the love of God and the sake of your brother man.

"Blessed are the peacemakers, for they shall be called the children of God."

Now to explain, I believe to force peace on the world as a police forces peace on the man who insists on fighting. I start in the U.S. first to build a great Army and Navy. This will give us the respect of the world and then when we speak the world will hear us and listen to what we say. The strong man is always heard with respect and the weak is never heard. The weak will rejoice at the glad news and will soon join us in peace and friendship, then with our power and many weak powers together will be one great power, then we will be the power of the world, then we can demand peace for us all. Now the next move is to build an international naval fleet and get all powers that will join us in the fleet of the world. The duty of this fleet will be to patrol of the world as a police patrols his beat of the city, and force international law and any war their duty will be to stop and arrest the leaders, and try them in accordance with international law, and any country that will not join us we will sink all battle ships in accordance with law. Each government will have to give so many battle ships to make up the great fleet of the world and no country will be allowed to own one battle ship of their own. No coast guns or forts will be allowed for or the international fleet can land on any country without danger for the great fleet can land on any coast or any country and it will protect all. No mines to blow up and to increase danger will be allowed in any waters, the international fleet will enforce the law, all shipwrecks and sinking ships, and ships on fire will get help from the great fleet. They will keep law and order and help humanity, and save life instead of destroying the life of man and mothers' sons. Each country will have to give so many ships to the great fleet and if they have not the ships they can buy from those who have too many. So I hope we will have battle ships to sell instead of to buy at the end of ten years. The amount of ships it will take I cannot say, but not so many as now. Now after the great fleet is launched and after all outside battle ships are sunk to the bottom then on earth will reign "Peace on earth and good will to men" and "the will of God will be done on earth even as it is done in heaven." Each country will man her ships with men and officers and one great chief will head them all, but no country will own her men or ships. They will be owned by the world and the servants of the world and no country or government shall command or own one single man or ship of the great navy of the world. It belongs to all. I will tell you where you will get the head of this great navy later. Now the next thing to do is to elect an international congress who will meet from all the countries of the world to make international laws for the world and every government will send their great and wise men to make laws for the world.

Now we must have a capital of the world for those great men of the world to meet and make laws for the world so we will choose a country who is unarmed and with no guns or forts to break through and we will be welcome and the people will receive us with joy and make room for us and bid us welcome. That country is Ireland. We will take Ireland for the great capital of the world. Now in this capital will be a president or king as the people wish, to sign all international laws and to send the great fleet when war breaks out to stop it and arrest the leaders of the trouble. Next is an international court and judge to try all law breakers and settle all grievances that may arise between countries and troubles of governments of all kinds will be settled by international court and juries. Under this new law all countries must be free; that is all that wish to rule and have self-government must be free to rule itself and any country bound by another government can sue or take their cause or trouble to the international supreme court and the court must set that country free and damage may be given the country in bondage for years back as the court sees fit. Such countries as Ireland, Poland, Finland, South Africa should be set free at once with heavy damages for years back and the government that held them in bondage be made to pay well for the exploiting for other weaker countries.

The international law will make provision so that each and [everyone] will have the right to worship God as he or she sees fit and the law must protect in any country in the world as long as they do not run it into polygamy or white slavery or use it for breaking laws, for private gains.

I will close by saying, remember I believe in compulsory peace, to force peace on the world, to drive the world into peace, and to tie the hands and the feet of the world so they cannot fight or war again, and any nation that does not come in, force her, drive her, make her sink her ships, tie her hands as an outlaw, as a robber, as a pirate, till she bows her head to the law of the whole world, and becomes a sister to us all and then, "Thy will be done on earth as it is in heaven." Amen. 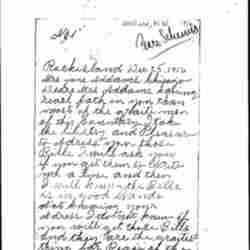 Wallace provides an overview of his plan for compulsory world peace.