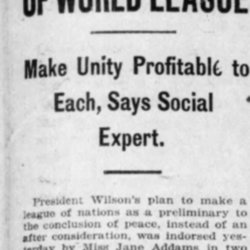 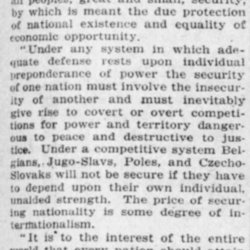 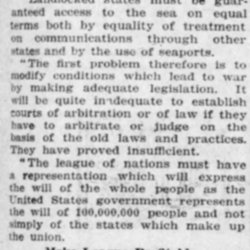 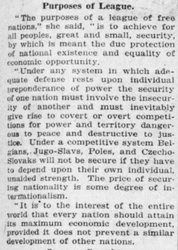 President Wilson's plan to make a league of nations as a preliminary to the conclusion of peace, instead of an after consideration, was [endorsed] yesterday by Miss Jane Addams in two addresses. She spoke in the morning at Sinai Temple, Forty-sixth Street and Grand Boulevard, and in the afternoon at the Morgan Park Congregational Church. Miss Addams advocated the principles adopted by the League of Free Nations, which, she said, was a more comprehensive international program than the one proposed by the League to Enforce Peace. [page 2]

"The purposes of a league of free nations," she said, "is to achieve for all peoples, great and small, security, by which is meant the due protection of national existence and equality of economic opportunity.

"Under any system in which adequate defense rests upon individual preponderance of power the security of one nation must involve the insecurity of another and must inevitably give rise to covert or overt competitions for power and territory dangerous to peace and destructive to justice. Under a competitive system Belgians, Jugo-Slavs, Poles, and Czecho-Slovaks will not be secure if they have to depend upon their own individual, unaided strength. The price of securing nationality is some degree of internationalism.

"It is to the interest of the entire world that every nation should attain its maximum economic development, provided it does not prevent a similar development of other nations." [page 3]

"States exercising authority in non-self-governing territories shall not exercise that power as a means of securing a privileged economic position for their own nationals.

"Goods and persons of the citizens of all states should be transported on equal terms on international rivers, canals, straits, or railroads.

"Landlocked states must be guaranteed access to the sea on equal terms both by equality of treatment on communications through other states and by the use of seaports.

"The first problem therefore is to modify conditions which lead to war by making adequate legislation. It will be quite inadequate to establish courts of arbitration or of law if they have to arbitrate or judge on the basis of the old laws and practices. They have proved insufficient.

"The league of nations must have a representation which will express the will of the whole people as the United States government represents the will of 100,000,000 people and not simply of the states which make up the union."

"The effective sanction of the association should not be alone the combined military power of the whole used as an instrument of repression, but such use of the worldwide control of economic resources as would make it more advantageous for a state to become and remain a member of the association and to cooperate with it, than to challenge it."

Addams endorses Wilson's plan for a league of nations as a step towards permanent peace.