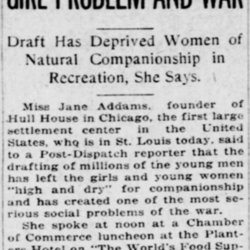 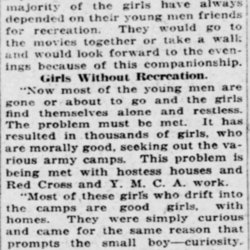 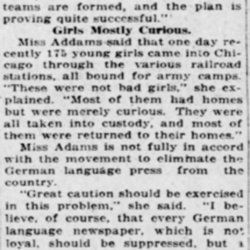 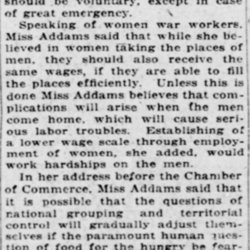 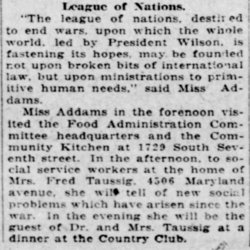 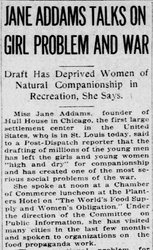 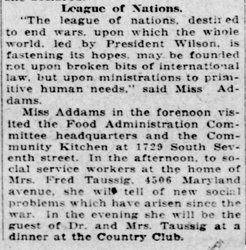 Draft Has Deprived Women of Natural Companionship in Recreation, She Says.

Miss Jane Addams, founder of Hull House in Chicago, the first large settlement center in the United States, who is in St. Louis today, said to a Post-Dispatch reporter that the drafting of millions of the young men has left the girls and the young women "high and dry" for companionship and has created one of the most serious social problems of the war.

She spoke at noon at a Chamber of Commerce luncheon at the Planters Hotel on "The World's Food Supply and Women's Obligation." Under the direction of the Committee on Public Information, she has visited many cities in the last few months and spoken to organizations on the food propaganda work. [page 2]

"The recreational problem for girls and young women is one of the big questions which the war has brought forth," said Miss Addams. "The drafting of all our available youths has left the girls high and dry, so to speak, because a vast majority of the girls have always depended on their young men friends for recreation. They would go to the movies together or take a walk and would look forward to the evenings because of this companionship."

"Now most of the young men are gone or about to go and the girls find themselves alone and restless. The problem must be met. It has resulted in thousands of girls, who are morally good, seeking out the various army camps. The problem is being met with hostess houses and Red Cross and Y.M.C.A. work.

"Most of these girls who drift into the camps are good girls, with homes. They were simply curious and came for the same reason that prompts the small boy -- curiosity. The trouble is that the visits themselves, while not harmful, often lead to disaster for the girls. In the South it was found that the average age of the girls found about army camps was 15 years, some being as young as 12 and 13 years." [page 3]

Miss Addams believes that while many girls are solving the problem by seeking recreation with members of their own sex, the question must be dealt with by the cities through organizations.

"In Chicago we have organized girls' patriotic leagues, and there are now 10,000 members in the city, all under 25 years of age. The leagues are organized in various centers and aim to provide wholesome entertainment for lonesome girls. Walking clubs, [basketball] and even baseball teams are formed, and the plan is proving quite successful."

Miss Addams said that one day recently 175 young girls came into Chicago through the various railroad stations, all bound for army camps. "These were not bad girls," she explained. "Most of them had homes but were merely curious. They were all taken into custody, and most of them were returned to their homes."

Miss [Addams] is not fully in accord with the movement to eliminate the German language press from the country.

"Great caution should be exercised in this problem," she said. "I believe, of course, that every German language newspaper, which is not loyal, should be suppressed, but a loyal German paper should not necessarily be suppressed because it is published in German. Take our Italian papers for example. I don't see how the Government would sell Liberty Bonds or seek subscriptions for the Red Cross, Y.M.C.A. and other war activities from many of the Italians, were it not for the Italian newspapers. Many Italians, fairly well educated in their own language, cannot read or write English, and the same condition no doubt applies to other nationalities." [page 4]

The volunteer method of observing food rules should be tried fully before any arbitrary laws are put in effect, Miss Addams thinks. Housewives throughout the country are responding splendidly to the food propaganda, she said, and observance should be voluntary, except in case of great emergency.

Speaking of women war workers, Miss Addams said that while she believed in women taking the places of men, they should also receive the same wages, if they are able to fill the places efficiently. Unless this is done Miss Addams believes that complications will arise when the men come home, which will cause serious labor troubles. Establishing of a lower wage scale through employment of women, she added, would work hardships on the men.

In her address before the Chamber of Commerce, Miss Addams said that it is possible that the questions of national grouping and territorial control will gradually adjust themselves if the paramount human question of food for the hungry be fearlessly and drastically treated upon an international basis. If the production and shipping of food was no longer a commercial enterprise, but a desire to feed the hungry, a new and powerful force in international affairs would have to be reckoned with, she declared. [page 5]

"The league of nations, destined to end wars, upon which the whole world, led by President Wilson, is fastening its hopes, may be founded not upon broken bits of international law, but upon ministrations to primitive human needs," said Miss Addams.

Miss Addams in the forenoon visited the Food Administration Committee headquarters and the Community Kitchen at 1729 South Seventh Street. In the afternoon, to social service workers at the home of Mrs. Fred Taussig, 4506 Maryland Avenue, she will tell of new social problems which have arisen since the war. In the evening she will be the guest of Dr. and Mrs. Taussig at a dinner at the Country Club. 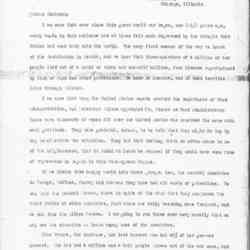 Addams discusses the effects of the war on young girls and women, efforts to ban German-language newspapers, and food conservation efforts.