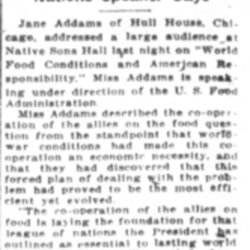 Miss Addams described the [cooperation] of the allies on the food question from the standpoint that world-war conditions had made this cooperation an economic necessity, and that they had discovered that this forced plan of dealing with the problem had proved to be the most efficient yet evolved.

"The [cooperation] of the allies on food is laying the foundation for that league of nations the President has outlined as essential to lasting world peace," she said. "The nations, having learned to act and [think] together on the food question as a matter of mutual salvation, will come naturally to think and act together on other world problems. For instance, the international aspects of the food question I think will play a most important part in the settlement of the status of the Bosphorus at the end of the war. That route must be kept open, and beyond the control of any one nation, and the problem of the Dardanelles is mainly a food question. The Balkan question may be forever solved by giving its landlocked states access to water with free and inalienable trade routes to the outside. Never again must the world invite famine such as has been almost perennial in certain of these countries." 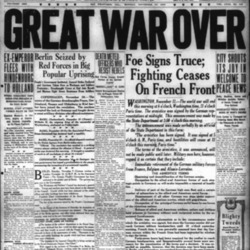 Addams argues that the cooperation of the allies on food suggests that they can cooperate on other food problems.