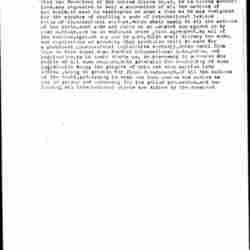 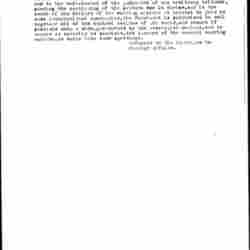 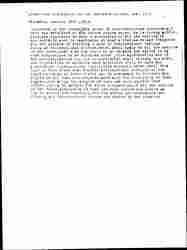 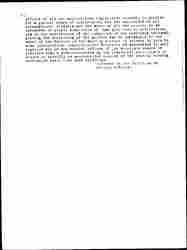 Resolved by The Senate (The House Of Representatives concurring,) That the President of The United States be, [and] he is hereby authorized, and requested to call a convention of all the nations of the world, to meet in Washington at such a time as he may designate for the purpose of drafting a code of international law, and rules of international conduct, which shall apply to all the nations of the earth, such code and rules to be adopted and agreed to by such nations, and to be enforced under joint agreement, by all of the nations, against any one or more, which shall disobey the code, and regulations so adopted; that provision shall be made for a permanent international legislative assembly, which shall from time to time enact such further international code, rules, and regulations, as in their wisdom may be necessary to preserve [the] rights of all such nations, with provision for continuity of such legislative body; the purpose of this act when carried into effect, being to provide for final disarmament, of all the nations of the world, preserving in each one such armies and navies as may be proper and necessary for its police [protection], and enforcing all international rights and duties by the combined [page 2] efforts of all the nations: such legislative assembly to provide for a general court of arbitration, for the settlement of all international disputes, and the power of all the nations to be exercised to compel submission of such questions to arbitration, and to the enforcement of the [judgment] of the arbitrary tribunal, sending the continuing of the present war in Europe, and in the event of the failure of the warring nations at present to join in such international convention, the President is authorized to call together all of the neutral nations of the world, and secure if possible such a code, guaranteed by the respective nations, and to secure as speedily as possible, the consent of the several warring nations, to enter into such agreement.

Referred to The Committee On Foreign Affairs. 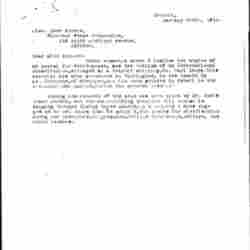