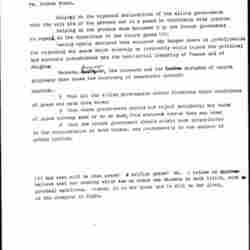 French Section of The International Committee of Women for Permanent Peace

Relying on the repeated declarations of the allied governments that the only aim of the present war is a peace in conformity with justice:

Relying on the promise made November 3 by the French government in regard to the conditions of the future peace (1):

Having openly declared that whatever may happen there is justification for rejecting any peace which directly or indirectly would injure the political and economic independence and the territorial integrity of France and of Belgium:

Because, [illegible] <however> the slowness and the faults mistakes of secret diplomacy have shown how necessary is democratic control:

1 That all the allied governments should formulate their conditions of peace and make them known:

2 That these governments should not reject designedly any terms of peace already made or to be made, from whatever source they may come:

3 That the French government should submit such propositions to the consideration of both houses, and consequently to the control of public opinion.

(1) And what will be that peace? A selfish peace? No. I refuse to believe that our country which was so noble can descend to such little, such personal ambitions. France, it is her honor and it will be her glory, is the champion of Right. 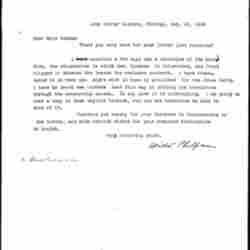 The French Section of the ICWPP presents terms by which all allied governments can abide in an effort to establish a system for peace.