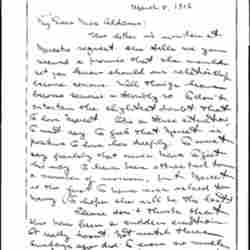 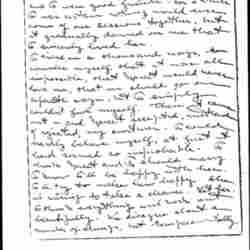 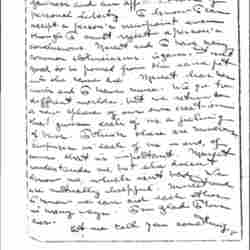 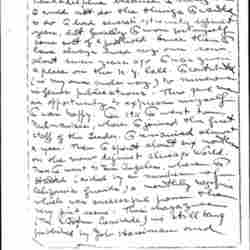 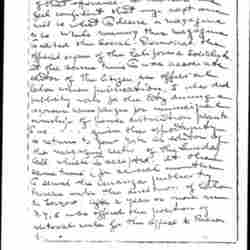 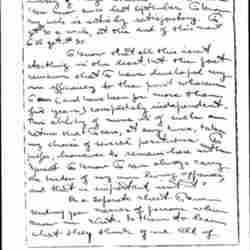 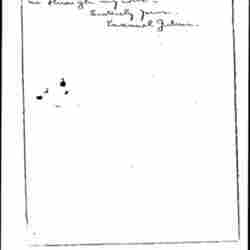 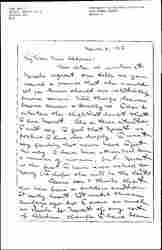 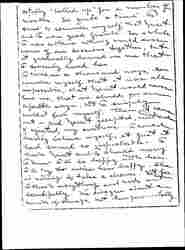 This letter is written at Marcets request. She tells me you received a promise that she would let you know should our relationship become serious. Well, things have become serious -- terribly so. I don't entertain the slightest doubt that I love Marcet. It's a tense situation; I must say. I feel that Marcet is positive I love her deeply. I must say frankly that never have I felt this way. I have been attracted to a number of women, but Marcet is the first I have ever asked to marry (I hope she will be the last.)

Please don't think that this has been a sudden emotion. It really hasn't. Not until three Sundays ago did I even so much as speak to Marcet of any sort of affection, though I have been [page 2] totally "balled up" for a number of months. For quite a time I tried to convince myself that Marcet and I were good friends. For a while I was certain nothing would ever come of our sessions together, but it gradually dawned on me that I sincerely loved her.

I tried, in a thousand ways, to convince myself that it was all impossible, that Marcet would never love me, that we should go our [separate] ways, but I simply couldn't fool myself. Then it came out -- and Marcet accepted, instead of rejected, my overtures. I could hardly believe myself, at first it had seemed so improbable. I think Marcet and I should marry. I know I'll be happy with her. I'll try to make her happy. She is willing to take a chance. Let her. I think everything will work out beautifully. We disagree about a number of things, but temperamentally [page 3] we are compatible and that makes everything worth while. I believe we both have a sense of fairness and an appreciation of personal liberty. I know I can accept a person's viewpoint even though I must reject a person's conclusions. Marcet and I have many common enthusiasms. Again, it isn't good to be poured from the same pot into the same air. Marcet has her work and I have mine. We go to different worlds, but we return to a new sphere of our own creation that gives each of us a feeling of bliss. I think there are numerous surprises in each of us -- and, of course, that is important. Marcet understands me, but she doesn't know me, which isn't bad. We are mutually helpful. Marcet and I know we can aid each other in many ways. I'm glad I love her.

Let me tell you something [page 4] about myself. When about sixteen, I left my home in Philadelphia because I realized I could not do the things I wanted to do. I had several extremely difficult years, but finally I won for myself some sort of a foothold. Since then I have always hoed my own row. About seven years ago I was given a place on the N.Y. Call. I contributed (in my own crude way) to numerous inferior publications. This gave me an opportunity to express myself. I was happy. In 1911 I went to Milwaukee, where I joined the first staff of the Leader. I remained almost a year. Then I spent about six months on the now defunct Chicago World. Then I went to Los Angeles, where I started (aided by a number of California friends) a monthly magazine which was successful from the very first issue. This magazine (The Western Comrade) is still being published by Job Harriman and [page 5] Frank E. Wolfe, the men who purchased it from me. I'm proud of that experience. It makes me feel confident that my next one will be what I desire a magazine to be. While running this magazine I edited the Social-Democrat, the official organ of the California Socialists. At the same time I was associate editor of The Citizen, an official labor union publication. I also did publicity work for the city during a vigorous campaign for municipal ownership of power distribution plants. I was then given the opportunity to return to New York as editor of the magazine [section] of the Sunday Call, which I accepted. At the same time (for several months) I served the Carranza publicity bureau under the direction of Carlo de Fornaro. After a year or more in N.Y, I was offered the position of editorial writer for the Appeal to Reason. [page 6] I accepted because I wanted the experience of working on a successful weekly of huge circulation. I have been here since last September. I know my work is entirely satisfactory. I get $30 a week, at the end of this month I'll get $35.

I know that all this isn't startling in the least, but the fact remains that I have developed my own efficiency to the point wherein I am (and have been for more than five years) completely independent. This ability of mine is of such a nature that I can, at any time, take my choice of several positions. I prefer, however to remain here with Marcet. I know I can always carry the burden of my own living expenses, and that is important, isn't it? Julius tells Addams that he has fallen in love with Marcet Haldeman and provides details on his history in order to gain Addams' support.

This letter appears to be in Marcet Haldeman's hand - perhaps this is a copy she wrote out and retained. Enclosed list of names was not found.