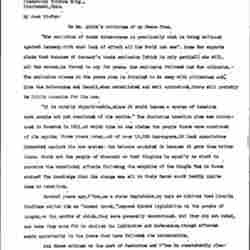 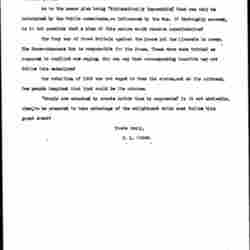 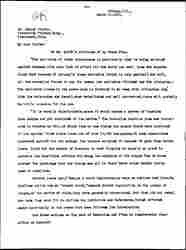 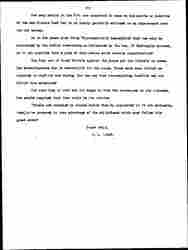 Re Mr. Quick's criticism of my Peace Plan.

"The exclusion of trade intercourse is practically what is being enforced against Germany, with what lack of effect all the World can see". Some War experts claim that because of Germany's trade exclusion (which is only partial) she will, all the sooner, be forced to cry for peace. Her exclusion followed her War ultimatum. The exclusion clause in the peace plan is intended to do away with ultimatums and, like the Referendum and Recall, when established and well understood, there will probably be little occasion for its use.

"It is morally objectionable, since it would impose a system of taxation upon people not yet convinced of its merits." The Pastoriza taxation plan was introduced in Houston in 1911, at which time no one claims the people there were convinced of its merits; three years later, out of over 10,000 tax-payers, 50 land speculators dissented against the new system -- the balance accepted it because it gave them better times. Would not the people of Missouri or West Virginia be equally as alert to perceive the beneficial effects following the adoption of the Single Tax in those states? The knowledge that the change was all in their favor would hardly incite them to rebellion.

Several years ago, U'Ren, as a state legislator, by ways so dubious that Lincoln Steffens called him an "honest crook," imposed direct legislation on the people of Oregon, on the merits of which, they were generally unconvinced. But they did not rebel, nor have they seen fit to abolish the Initiative and Referendum, though afforded ample opportunity in the years that have followed its introduction.

Can these actions on the part of Pastoriza and U'Ren be consistently classified as [immoral]? [page 2]

How many people in the U.S. are competent to pass on the merits or demerits of the new Finance Law? Yet it is pretty generally welcomed as an improvement over the old system.

As to the peace plan being "diplomatically impossible," that can only be determined by the Public conscience, as influenced by the War. If thoroughly aroused, is it not possible that a plan of this nature would receive consideration?

The Tory war of Great Britain against the Boers put the Liberals in power. The Russo-Japanese War is responsible for the [Duma]. These wars were trivial as compared to conflict now raging. Who can say that corresponding benefits may not follow this cataclysm?

Our rebellion of 1860 was not waged to free the slaves, and at its outbreak, few people imagined that that would be its outcome.

"People are educated by events rather than by arguments." Is it not advisable, then, to be prepared to take advantage of the [enlightenment] which must follow this great event?