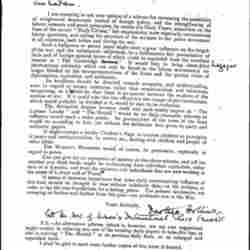 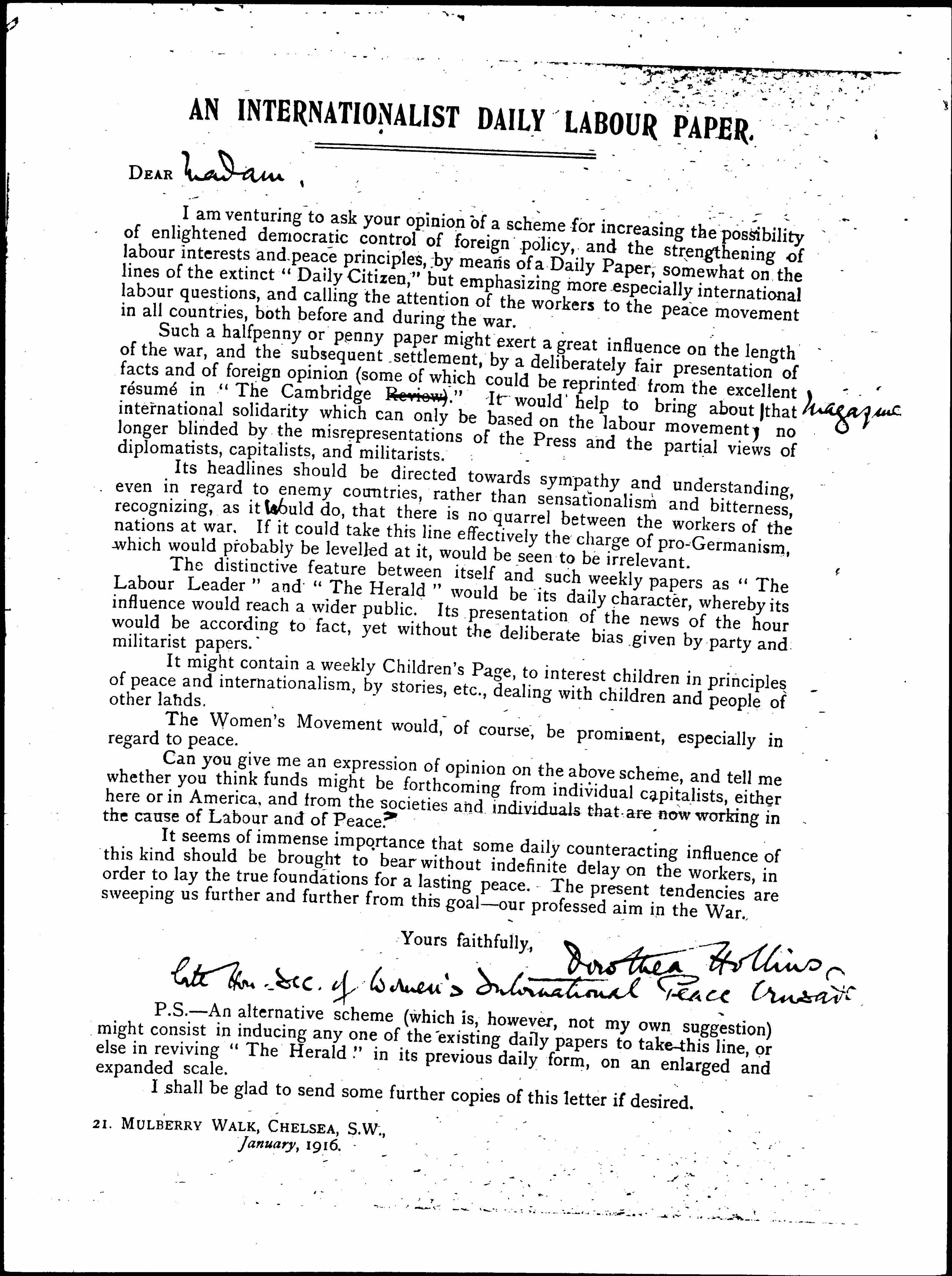 I am venturing to ask your opinion of a scheme for increasing the possibility of enlightened democratic control of foreign policy, and the strengthening of [labor] interests and peace principles, by means of a Daily Paper, somewhat on the lines of the extinct "Daily Citizen," but emphasizing more especially international [labor] questions, and calling the attention of the workers to the peace movement in all countries, both before and during the war.

Such a halfpenny or penny paper might exert a great influence on the length of the war, and the subsequent settlement, by a deliberately fair presentation of facts and of foreign opinion (some of which could be reprinted from the excellent résumé in "The Cambridge Review <Magazine>)." It would help to bring about that international solidarity which can only be based on the [labor] movement, no longer blinded by the misrepresentations of the Press and the partial views of diplomatists, capitalists, and militarists.

Its headlines should be directed towards sympathy and understanding, even in regard to enemy countries, rather than sensationalism and bitterness, recognizing, as it would do, that there is no quarrel between the workers of the nations at war. If it could take this line effectively the charge of pro-Germanism, which would probably be [leveled] at it, would be seen to be irrelevant.

The distinctive feature between itself and such weekly papers as "The Labour Leader" and "The Herald" would be its daily character, whereby its influence would reach a wider public. Its presentation of the news of the hour would be according to fact, yet without the deliberate bias given by party and militarist papers.

It might contain a weekly Children's Page, to interest children in principles of peace and internationalism, by stories, etc., dealing with children and people of other lands.

The Women's Movement would, of course, be prominent, especially in regard to peace.

Can you give me an expression of opinion on the above scheme, and tell me whether you think funds might be forthcoming from individual capitalists, either here or in America, and from the societies and individuals that are now working in the cause of [Labor] and of Peace?

It seems of immense importance that some daily counteracting influence of this kind should be brought to bear without indefinite delay on the workers, in order to lay the true foundations for a lasting peace. The present tendencies are sweeping us further and further from this goal -- our professed aim in the War.

P.S. -- An alternative scheme (which is, however, not my own suggestion) might consist of inducing any one of the existing daily papers to take this line, or else in reviving "The Herald" in its previous daily form, on an enlarged and expanded scale.

I should be glad to send some further copies of this letter if desired. 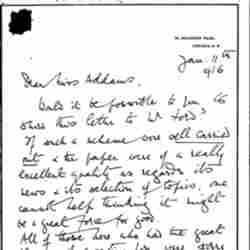 Hollins proposes a daily international newspaper to counter what she sees as overt militarism and sensationalism in the media.