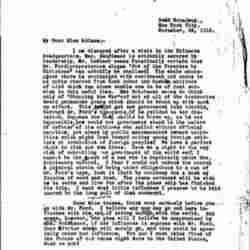 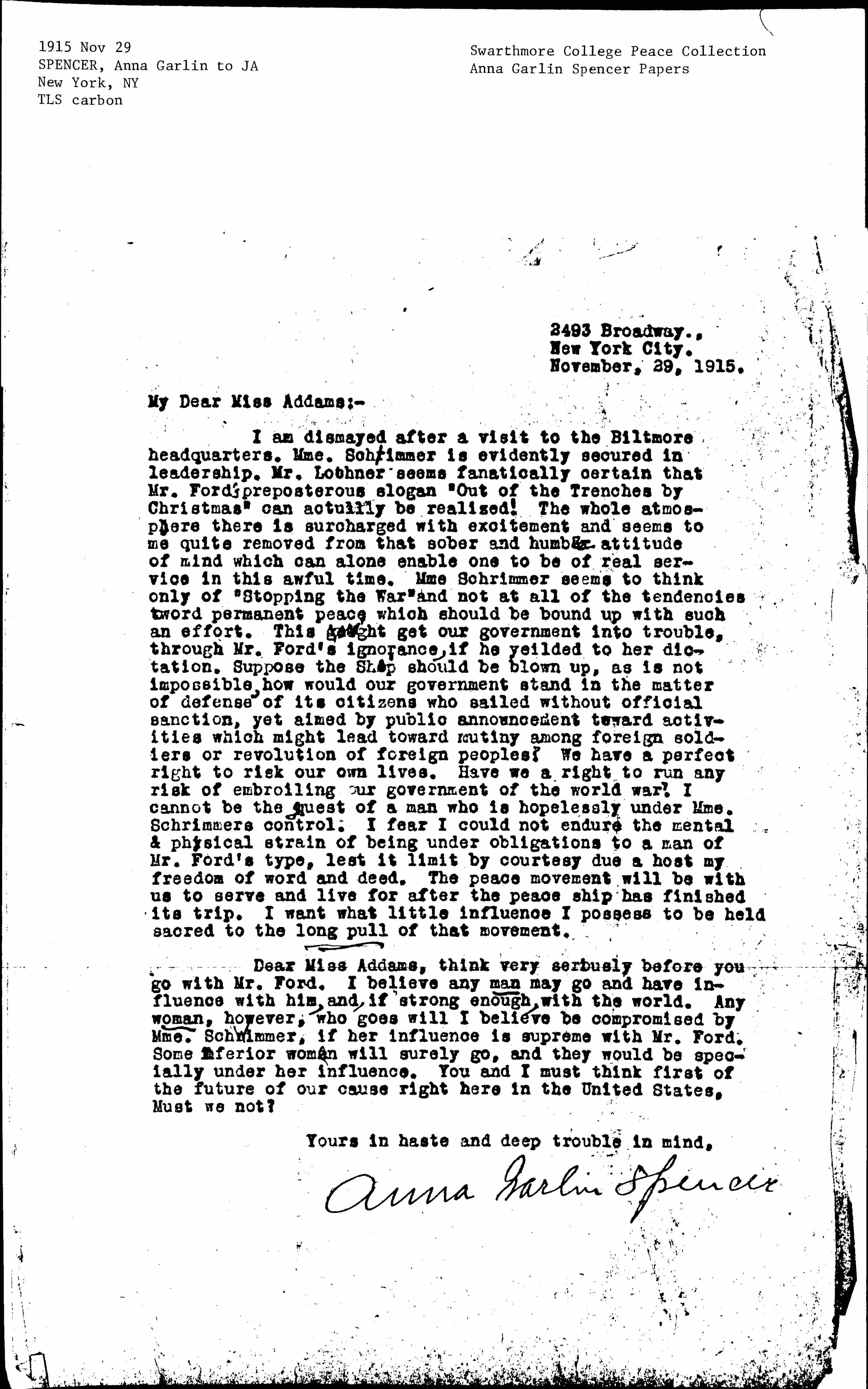 I am dismayed after a visit to the Biltmore headquarters. Mme. [Schwimmer] is evidently secured in leadership. Mr. Lochner seems fanatically certain that Mr. Ford's preposterous slogan "Out of the Trenches by Christmas" can [actually] be realized! The whole atmosphere there is surcharged with excitement and seems to me quite removed from that sober and [humble] attitude of mind which can alone enable one to be of real service in this awful time. Mme [Schwimmer] seems to think only of "Stopping the War" and not at all of the tendencies [toward] permanent peace which should be bound up with such an effort. This [might] get our government into trouble, through Mr. Ford's ignorance, if he yielded to her dictation. Suppose the Ship should be blown up, as is not impossible, how would our government stand in the matter of defense of its citizens who sailed without official sanction, yet aimed by public announcement toward activities which might lead toward mutiny among foreign soldiers or revolution of foreign peoples? We have a perfect right to risk our own lives. Have we a right to run any risk of embroiling our government of the world war? I cannot be the guest of a man who is hopelessly under Mme. [Schwimmer's] control. I fear I could not endure the mental & physical strain of being under obligations to a man of Mr. Ford's type, lest it limit by courtesy due a host my freedom of word and deed. The peace movement will be with us to serve and live for after the peace ship has finished its trip. I want what little influence I possess to be held sacred to the long pull of that movement.

Dear Miss Addams, think very seriously before you go with Mr. Ford. I believe any man may go and have influence with him, and, if strong enough, with the world. Any woman, however, who goes will I believe be compromised by Mme. Schwimmer, if her influence is supreme with Mr. Ford. Some inferior [women] will surely go, and they would be specially under her influence. You and I must think first of the future of our cause right here in the United States. Must we not?

Yours in haste and deep trouble in mind,

Spencer expresses her concerns and voices her suspicions to Addams in regards to the Henry Ford peace plan.