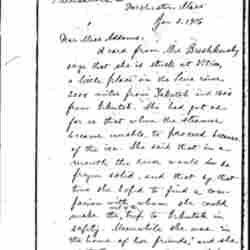 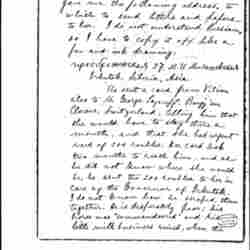 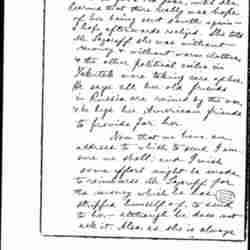 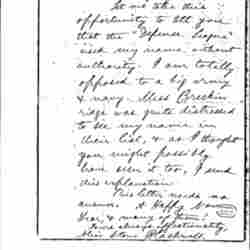 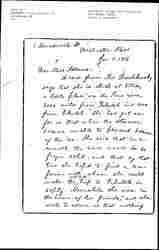 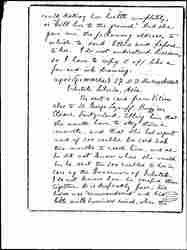 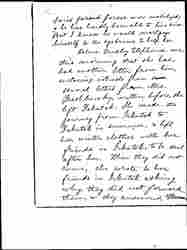 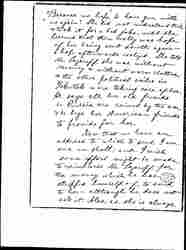 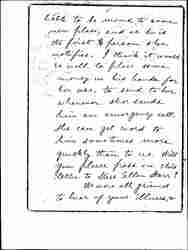 A card from Mrs. Breshkovsky says that she is stuck at Vitim, a little place on the Lena River, 2000 miles from Yakutsk and 1400 from Irkutsk. She had got as far as that when the steamer became unable to proceed because of the ice. She said that in a month the river would be frozen solid, and that by that time she hoped to find a companion with whom she could make the <rest of the> trip to Irkutsk in safety. Meanwhile she was "in the house of her friends," and she wrote to assure us that nothing [page 2] could destroy her health completely, or "kill her to the ground." And she gave me the following address, to which to send letters and papers to her. I do not understand Russian, so I have to copy it off like a pen-and-ink drawing:

She sent a card from Vitim also to Mr George Lazareff, Baugy sur Clarens, Switzerland, telling him that she would have to stay there a month, and that she had urgent need of 200 [rubles]. Her card took two months to reach him, and as he did not know where she would be, he sent the 200 [rubles] to her in care of the Governor of Irkutsk. I do not know how he scraped them together. He is desperately poor; his horse was "commandeered" and his little milk business ruined, when the [page 3] Swiss forced forces were mobilized; & he has hardly been able to live since. But I know he would mortgage himself to the eyebrows to help her.

Helena Dudley telephones me this morning that she has had another letter from him, enclosing extracts from several letters from Mrs. Breshkovsky, written before she left Yakutsk. She made the journey from Irkutsk to Yakutsk in summer, & left her winter clothes with her friends in Irkutsk, to be sent after her. When they did not come, she wrote to her friends in Irkutsk asking why they did not forward them, and they answered, "Because [page 4] "Because we hope to have you with us again." She did not understand this, & took it for a bad joke, until she learned that there really was hope of her being sent south again -- a hope afterwards realized. She told Mr. Lazareff she was without money & without warm clothes, & the other political exiles in Yakutsk were taking care of her. He says all her old friends in Russia are ruined by the war, & he begs her American friends to provide for her.

Now that we have an address to which to send, I am sure we shall; and I wish some effort might be made to reimburse Mr. Lazareff for the money which he has stripped himself of, to send to her -- although he does not ask it. Also, as she is always [page 5] liable to be moved to some new place, and as he is the first person she notifies, I think it would be well to place some money in his hands for her use, to send to her whenever she sends him an emergency call. She can get word to him sometimes more quickly than to us. Will you please pass on this letter to Miss Ellen Starr?

We were all grieved to hear of your illness, & [page 6] glad to know you are better. Do take care of yourself.

Let me take this opportunity to tell you that the "Defense League" used my name without authority. I am totally opposed to a big army & navy. Miss Breckinridge was quite distressed to see my name in their list, & as I thought you might possibly have seen it too, I send this explanation.

This letter needs no answer. A Happy New Year, & many of them! Blackwell asks Addams for money on behalf of Catherine Breshkovsky, a Russian exile.