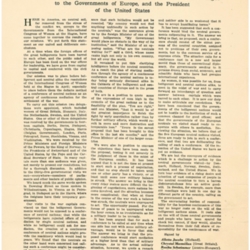 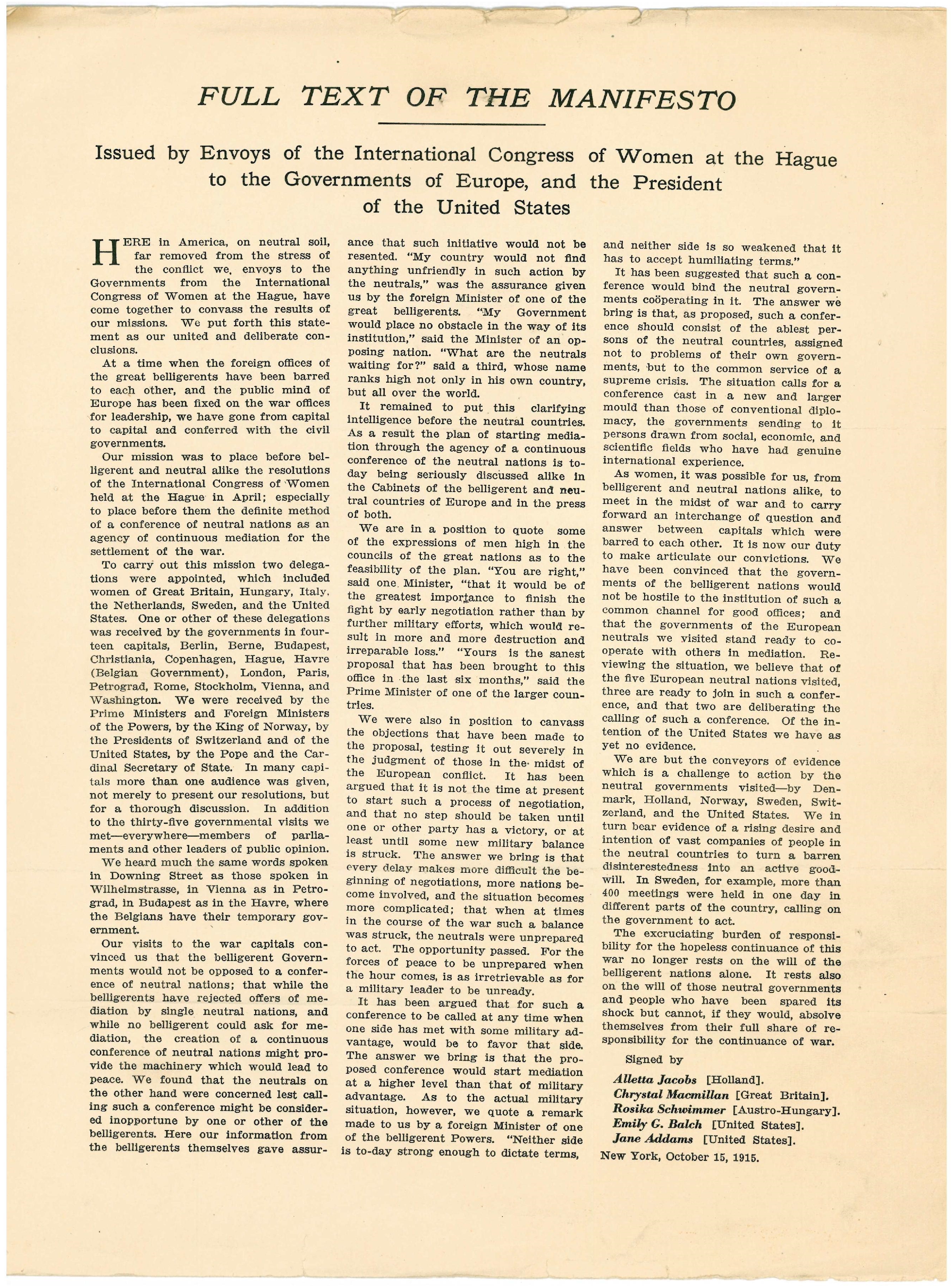 FULL TEXT OF THE MANIFESTO

Issued by Envoys of the International Congress of Women at The Hague to the Governments of Europe, and the President of the United States

Here in America, on neutral soil, far removed from the stress of the conflict we, envoys to the Governments from the International Congress of Women at The Hague, have come together to canvass the results of our missions. We put forth this statement as our united and deliberate conclusions.

At a time when the foreign offices of the great belligerents have been barred to each other, and the public mind of Europe has been fixed on the war offices for leadership, we have gone from capital to capital and conferred with the civil governments.

Our mission was to place before belligerent and neutral alike the resolutions of the International Congress of Women held at The Hague in April; especially to place before them the definite method of a conference of neutral nations as an agency of continuous mediation for the settlement of the war.

To carry out this mission two delegations were appointed, which included women of Great Britain, Hungary, Italy, the Netherlands, Sweden, and the United States. One or other of these delegations was received by the governments in fourteen capitals, Berlin, Berne, Budapest, Christiania, Copenhagen, Hague, Havre (Belgian Government), London, Paris, Petrograd, Rome, Stockholm, Vienna, and Washington. We were received by the Prime Ministers and Foreign Ministers of the Powers, by the King of Norway, by the Presidents of Switzerland and of the United States, by the Pope and the Cardinal Secretary of State. In many capitals more than one audience was given, not merely to present our resolutions, but for a thorough discussion. In addition to the thirty-five governmental visits we met -- everywhere -- members of parliaments and other leaders of public opinion.

We heard much the same words spoken in Downing Street as those spoken in Wilhelmstrasse, in Vienna as in Petrograd, in Budapest as in The Havre, where the Belgians have their temporary government.

Our visits to the war capitals convinced us that the belligerent Governments would not be opposed to a conference of neutral nations; that while the belligerents have rejected offers of mediation by single neutral nations, and while no belligerent could ask for mediation, the creation of a continuous conference of neutral nations might provide the machinery which would lead to peace. We found that the neutrals on the other hand were concerned lest calling such a conference might be considered inopportune by one or other of the belligerents. Here our information from the belligerents themselves gave assurance that such initiative would not be resented. "My country would not find anything unfriendly in such action by the neutrals," was the assurance given us by the foreign Minister of one of the great belligerents. "My Government would place no obstacle in the way of its institution," said the Minister of an opposing nation. "What are the neutrals waiting for?" said a third, whose name ranks high not only in his own country, but all over the world.

It remained to put this clarifying intelligence before the neutral countries. As a result the plan of starting mediation through the agency of a continuous conference of the neutral nations is today being seriously discussed alike in the Cabinets of the belligerent and neutral countries of Europe and in the press of both.

We are in a position to quote some of the expressions of men high in the councils of the great nations as to the feasibility of the plan. "You are right," said one Minister, "that it would be of the greatest importance to finish the fight by early negotiation rather than by further military efforts, which would result in more and more destruction and irreparable loss." "Yours is the sanest proposal that has been brought to this office in the last six months," said the Prime Minister of one of the larger countries.

We were also in position to canvass the objections that have been made to the proposal, testing it out severely in the judgment of those in the midst of the European conflict. It has been argued that it is not the time at present to start such a process of negotiation, and that no step should be taken until one or other party has a victory, or at least until some new military balance is struck. The answer we bring is that every delay makes more difficult the beginning of negotiations, more nations become involved, and the situation becomes more complicated; that when at times in the course of the war such a balance was struck, the neutrals were unprepared to act. The opportunity passed. For the forces of peace to be unprepared when the hour comes, is as irretrievable as for a military leader to be unready.

It has been argued that for such a conference to be called at any time when one side has met with some military advantage, would be to favor that side. The answer we bring is that the proposed conference would start mediation at a higher level than that of military advantage. As to the actual military situation, however, we quote a remark made to us by a foreign Minister of one of the belligerent Powers. "Neither side is [today] strong enough to dictate terms, and neither side is so weakened that it has to accept humiliating terms."

It has been suggested that such a conference would bind the neutral governments [cooperating] in it. The answer we bring is that, as proposed, such a conference should consist of the ablest persons of the neutral countries, assigned not to problems of their own governments, but to the common service of a supreme crisis. The situation calls for a conference cast in a new and larger [mold] than those of conventional diplomacy, the governments sending to it persons drawn from social, economic, and scientific fields who have had genuine international experience.

As women, it was possible for us, from belligerent and neutral nations alike, to meet in the midst of war and to carry forward an interchange of question and answer between capitals which were barred to each other. It is now our duty to make articulate our convictions. We have been convinced that the governments of the belligerent nations would not be hostile to the institution of such a common channel for good offices; and that the governments of the European neutrals we visited stand ready to cooperate with others in mediation. Reviewing the situation, we believe that of the five European neutral nations visited, three are ready to join in such a conference, and that two are deliberating the calling of such a conference. Of the intention of the United States we have as yet no evidence.

We are but the conveyors of evidence which is a challenge to action by the neutral governments visited -- by Denmark, Holland, Norway, Sweden, Switzerland, and the United States. We in turn bear evidence of a rising desire and intention of vast companies of people in the neutral countries to turn a barren disinterestedness into an active goodwill. In Sweden, for example, more than 400 meetings were held in one day in different parts of the country, calling on the government to act.

The excruciating burden of responsibility for the hopeless continuance of this war no longer rests on the will of the belligerent nations alone. It rests also on the will of those neutral governments and people who have been spared its shock but cannot, if they would, absolve themselves from their full share of responsibility for the continuance of war. 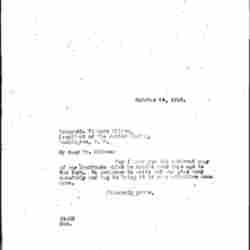 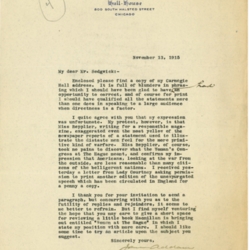 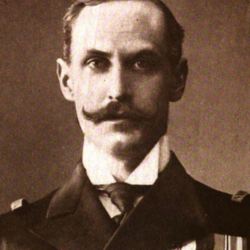 Proposal for a Conference of the Neutral Nations, August 2, 1915 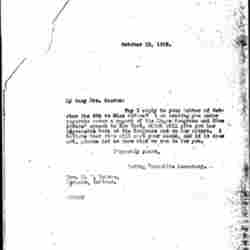 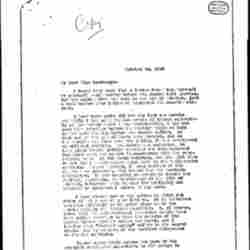 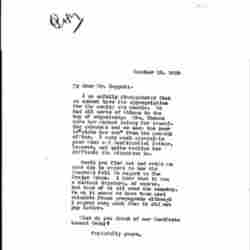 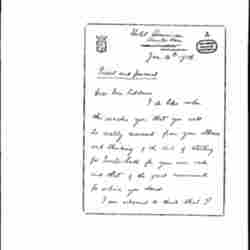 The International Congress of Women reports on their meetings with the political leaders of Europe, arguing that both neutral and belligerent governments are open to participating in a neutral conference aimed at ending the war.

A poor quality image on the microfilm has been replaced with a new scan from the Massachusetts Historical Society.