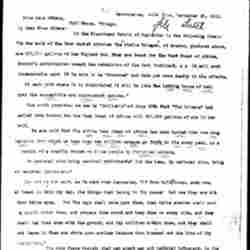 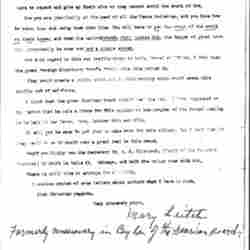 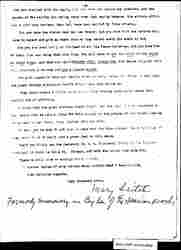 In the Missionary Herald of September is the following item: -- "In the hold of the four masted schooner The 'Stelle Krieger,' of Boston, pictured above, are 210,000 gallons of New England rum. They are bound for the East Coast of Africa. Boston's contribution toward the redemption of the Dark Continent, it will work immeasurable harm; it is sure to be 'doctored' and made yet more deadly in its effects.

At each port where it is distributed it will be like the letting loose of hell upon the susceptible and unprotected natives."

The month previous, we see by "Collier's" of June 26th that "The Orleans" had sailed from Boston for the West Coast of Africa with 300,000 gallons of rum in her hold.

We are told that the entire West Coast of Africa has been turned into one long bar-room from which no less than two million savages go forth to die every year, as a result of a traffic forced on those people by Christian nations.

Who was it who said, as He wept over Jerusalem, "If thou hadst known, even now, at least in this thy day, the things that belong to thy peace! but now they are hid from thine eyes. For the days shall come upon thee, that thine enemies shall cast a trench about thee, and compass thee round and keep thee on every side, and they shall lay thee even with the ground, and thy children within thee, and they shall not leave in thee one stone upon another because thou knowest not the time of thy visitation."

The only Peace Society that can avert war and national [judgment], is the Society which on its bended knees calls for repentance and reformation.

In the year 1897 I heard the Rev. Hudson Taylor address an audience of British Christians on the evils of the Opium Traffic with China. He said, "God will surely punish this nation because she forced that traffic on the helpless Chinese at the cannon's mouth." And he said, "The battle of Armageddon is yet to come, there may be some here who will live to see blood up to the horses bridles."

What kind of a God would God be if He did not punish the nations for great national sins? [page 2]

You are credited with the saying that war does not settle any question, and the papers of the country are making merry over that saying because the editors affirm that a good many matters, thus far, have been settled by force of arms.

But you have the vision that can see deeper; and you know that the nations will have to repent and give their sins or they cannot avoid the wrath of God.

Now you are practically at the head of all the Peace Societies, and you know how to reach them and swing them into line. You will have to get the women of the world on their knees, and when the nations [stand] right before God, the danger of great wars will practically be over and not a minute sooner.

Now with regard to this rum traffic which is being forced on Africa, I feel that the great Foreign Missionary Boards should take this matter up.

They could create a public sentiment in this country which would sweep this traffic out of existence.

I think that the great American Board should [lead] the way. I have suggested to Dr. Barton that he make a place for this subject on the program of its Annual Meeting to be held in New Haven, Conn. October 26th and 27th.

It will not be easy to get them to make room for this subject, but I feel that if they would do so it would mean a great deal to this cause.

Could you kindly see the Secretary Dr. A. N. Hitchcock, (Sec'y of the Interior District) 19 South La Salle St. Chicago, and talk the matter over with him.

There is still time to arrange for a meeting.

I enclose copies of some letters which explain what I have in mind.

Formerly missionary in Ceylon of the American Board. 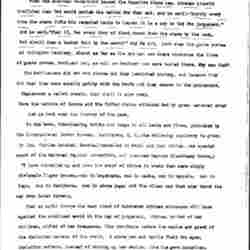 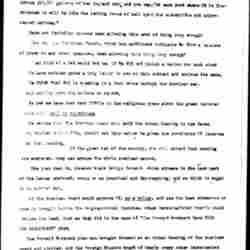 Leitch complains about the amount of rum being distributed around the world.