An Appreciation from Miss Addams, September 1917 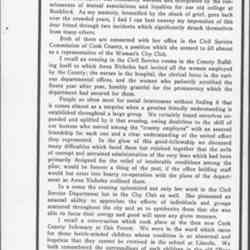 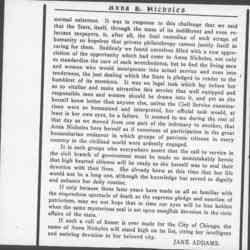 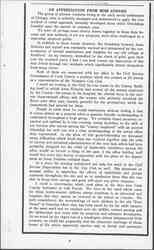 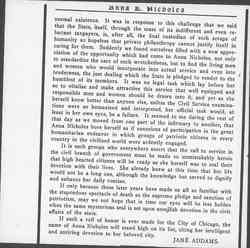 AN APPRECIATION FROM MISS ADDAMS

The group of pioneer residents living in the early social settlements of Chicago, who so ardently discussed and endeavored to apply the new method of social approach, naturally developed those stable friendships founded upon the pursuit of common aims.

We were all perhaps more closely drawn together in those days because our new methods, if not our purposes, were often challenged by a somewhat skeptical public.

In addition to those bonds, however, the friendship between Anna Nicholes and myself was constantly warmed and interpreted by the consciousness of mutual associations and loyalties for our old college at Rockford. As my memory, intensified by the shock of grief, goes back over the crowded years, I find I can best convey my impression of this dear friend through two incidents which significantly detach themselves from many others.

Both of them are connected with her office in the Civil Service Commission of Cook County, a position which she seemed to fill almost as a representative of the Woman's City Club.

I recall an evening in the Civil Service rooms in the County Building itself to which Anna Nicholes had invited all the women employed by the County; the nurses in the hospital, the clerical force in the various departmental offices, and the women who patiently scrubbed the floors year after year, humbly grateful for the permanency which the department had secured for them.

People so often meet for social intercourse without finding it that it comes almost as a surprise when a genuine friendly understanding is established throughout a large group. We certainly found ourselves expanded and uplifted by it that evening, owing doubtless to the skill of our hostess who moved among the "county [employees]" with an assured friendship for each one and a clear understanding of the united effort they represented. In the glow of this good-fellowship we discussed many difficulties which faced them but rejoiced together that the evils of corrupt and untrained administration of the very laws which had been primarily designed for the relief of intolerable conditions among the poor, would be forever a thing of the past, if the office holding staff would but enter into hearty [cooperation] with the plans of the department as Anna Nicholes outlined them.

In a sense the evening epitomized not only her work in the Civil Service Department but in the City Club as well. She possessed an unusual ability to appreciate the efforts of individuals and groups scattered throughout the city and so to synthesize them that she was able to focus their energy and good will upon any given measure.

I recall a conversation which took place at the then new Cook County Infirmary at Oak Forest. We were in the ward which cares for those feeble-minded children whose condition is so abnormal and hopeless that they cannot be received in the school at Lincoln. We both remembered the surroundings of such children in the old "Poor House" at Dunning where they had been cared for by the adult inmates of the same ward and we rejoiced over the skillful, trained nursing and the immaculate new room with its sunporch and adequate dormitories. As we stood by the caged bed of a misshapen, almost dehumanized little creature, we could but poignantly feel the elemental challenge of those forms of life which apparently survive only to deride and caricature [page 2] normal existence. It was in response to this challenge that we said that the State, itself, through the mass of its indifferent and even reluctant taxpayers, is, after all, the final custodian of such scraps of humanity so hopeless that private philanthropy cannot justify itself in caring for them. Suddenly we found ourselves filled with a new appreciation of the opportunity which had come to Anna Nicholes, not only to standardize the care of such wretchedness, but to find the living men and women who would incorporate into actual service and even into tenderness, the just dealing which the State is pledged to render to the humblest of its members. It was no legal task which lay before her so to vitalize and make attractive this service that well equipped and responsible men and women should be drawn into it, and yet as she herself knew better than anyone else, unless the Civil Service examinations were so humanized and interpreted, her official task would, at least in her own eyes, be a failure. It seemed to me during the rest of that day as we moved from one part of the infirmary to another, that Anna Nicholes bore herself as if conscious of participation in the great humanitarian endeavor in which groups of patriotic citizens in every country in the civilized world were ardently engaged.

It is such groups who everywhere assert that the call to service in the civil branch of government must be made so unmistakably heroic that high hearted citizens will be ready as she herself was to seal their devotion with their lives. She already knew at this time that her life would not be a long one, although the knowledge but served to dignify and enhance her daily routine.

If only because these later years have made us all so familiar with the stupendous spectacle of death as the supreme pledge and sanction of patriotism, may we not hope that in time our eyes will be less holden when the same mysterious seal is set upon unselfish devotion in the civic affairs of the state.

If such a roll of honor is ever made for the City of Chicago, the name of Anna Nicholes will stand high on its list, citing her intelligent and untiring devotion to her beloved city. 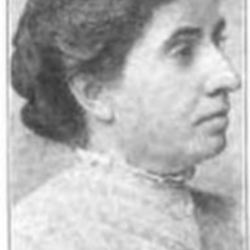 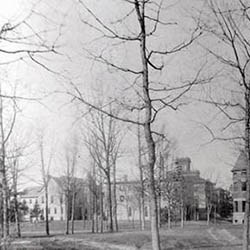 Addams pays tribute to the work and deeds of her recently departed friend Anna Eliza Nicholes.