Testimony Before the House Judiciary Committee on the Espionage Bill, April 9, 1917 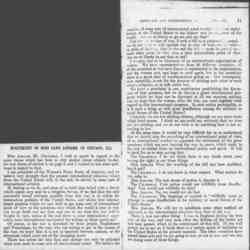 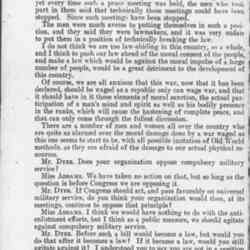 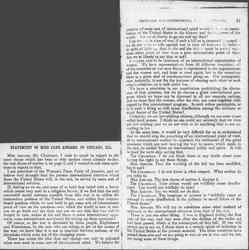 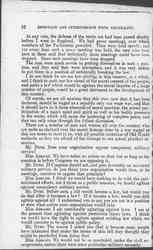 Miss ADDAMS. Mr. Chairman, I wish to speak in regard to the same clause which has been so ably spoken about already [today], the last clause of section 3, on page 9, and I wanted to ask some questions in regard to that.

I am president of the Woman's Peace Party of America, and we believe very strongly that the present international situation which faces the United States will, in the end, by solved by some sort of international solution.

If, feeling as we do, and some of us hold that belief with a fervor which comes very near to a religious fervor, if we feel that the only successful moral outcome possible from this war is to utilize the tremendous position of the United States, and utilize that international position which we now hold to get some sort of international point of view on the questions over which the world is now at war. Can we go forth and say that, and can we say that this war will be fought in vain, unless at the end there is some international apparatus, some international machinery for taking up these questions?

Of course, as the war is discussed by these people, Englishmen and Frenchmen, by the men who are trying to get at the causes of the war, we know that it is not in quarrels between nations, or the situations which arise out of the changing years.

Can we say, in time of war, if such a bill as is proposed is passed -- we do not wish to talk against war in time of war -- we do believe, in spite of fighting, that in the end the things must be settled upon some other point of view than a pure nationalistic point of view. Are we at liberty to say that or not?

I happen also to be chairman of an international organization of women. We have representatives from 20 different countries: all of the countries at war save Japan is represented in the organization, and the women met, and hope to meet again, but in the meantime there is a great deal of correspondence going on. Our correspondence, naturally, is not for the purpose of abusing each other or each other's religions, or to talk about war.

We have a provision in our constitution prohibiting the discussion of that question, but we do discuss a great international program which we hope can be discussed in all our separate nations, and we hope that the women, after the war, can come together with regard to this international program. Is such action permissible, or is it such a thing as will cause disaffection among the military or naval forces of the United States?

Certainly, we are law-abiding citizens, although we are [sometimes] called hard names. I think no one could say seriously that we were not law-abiding, and we do not wish to do anything that is not according to law.

The CHAIRMAN. I do not think there is any doubt about your having the right to say those things.

Miss ADDAMS. Then the wording of the bill has been modified, has it not?

The CHAIRMAN. I do not know in what respect. What section do you refer to.

Miss ADDAMS. No; we would not do that.

The CHAIRMAN. The language as present is "willfully cause or attempt to cause disaffection in the military or naval forces of the United States."

Miss ADDAMS. We will try to substitute some other method of approach to the international situation than that of the war.

There is just one other thing. I was in England during the first year of the war, and very soon after the defense of the realm act had been passed, which is the counterpart of this bill. If you will permit me to say so, I think there is a certain spirit of imitation in the United States at the present moment. The other countries have passed these acts and we are going to war, or are in war, and we, too, are doing some of these things. [page 2]

At any rate, the defense of the realm act had been passed shortly before I went to England. We had peace meetings, over which members of the Parliament presided. They were held openly, and yet every time such a peace meeting was held, the men who took part in them said that technically those meetings could have been stopped. Since such meetings have been stopped.

The men were much averse to putting themselves in such a position, and they said they were lawmakers, and it was very unfair to put them in a position of technically breaking the law.

I do not think we are too law-abiding in this country, as a whole, and I think to push our law ahead of the moral consent of the people, and make a law which would be against the moral impulse of a large number of people, would be a great detriment to the development of this country.

Of course, we are all anxious that this war, now that it has been declared, should be waged as a republic only can wage war, and that it should have in it those elements of moral sanction, the actual participation of a man's mind and spirit as well as his bodily presence in the ranks, which will cause the hastening of complete peace, and that can only come through the fullest discussion.

There are a number of men and women all over the country who are quite as alarmed over the moral damage done by a war waged as this one seems to start to be, with all possible imitation of Old World methods, as they are afraid of the damage to our actual physical resources.

Miss ADDAMS. We have taken no action on that, but so long as the question is before Congress we are opposing it.

Mr. DYER. If Congress should act, and pass favorably on universal military service, do you think your organization would then, at its meetings, continue to oppose that principle?

Miss ADDAMS. I think we would have nothing to do with the anti-enlistment efforts, but I think as a public measure, we should agitate against compulsory military service.

Mr. DYER. Before such a bill would become a law, but would you do that after it becomes a law? If it became a law, would you still agitate against it? I understood you to say you are not in a position to state what action your organization would take.

Mr. DYER. The reason I asked you that is because some people have intimated that under the terms of this bill they thought they might be precluded from doing that.

Miss ADDAMS. We would not be so precluded, under the civil arrangements, unless there were some particular military necessity. 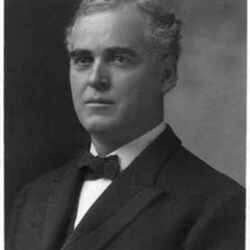 Addams testifies in opposition to a proposed bill that would censor anti-war speech before the House of Representatives Committee on Judiciary.