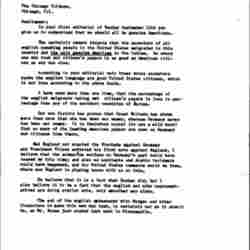 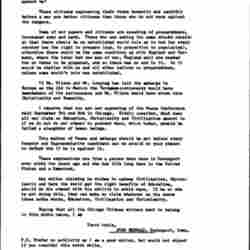 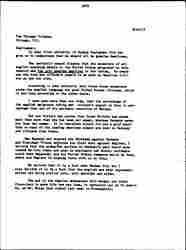 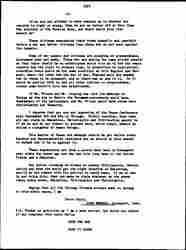 In your first editorial of Sunday September 12th you give us to understand that we should all be genuine Americans.

You certainly cannot dispute that the ancestors of all English speaking people in the United States emigrated to this country and the only genuine American is the Indian. So everyone who took out citizen's papers is as good an American citizen as anyone else.

According to your editorial only those whose ancestors spoke the English language are good United States citizens, which is not true according to the above facts.

I have seen more than one item, that the percentage of the English emigrants taking out citizen's papers is less in percentage than any of the northern countries of Europe.

Our own history has proven that Great Britain has shown more than once that she has been our enemy, whereas Germany never has been our enemy. It is therefore unjust (to use a mild word) that so many of the leading American papers are down on Germany and citizens from there.

Had England not started the Blockade against Germany and President Wilson enforced his first note against England, I believe that the submarine warfare on Germany's part would have ceased by this time; and also no Lusitania and Arabic incidents would have happened, and our United States commerce would be free, where now England is playing horse with us on this.

Do believe that it is a fact what Dunbar did; but I also believe it to be a fact that the English and other representatives are doing similar acts, only smoother [and] slyer.

The act of the English ambassador with Morgan and other financiers to make this new war loan, is certainly not as it should be, as Mr. Bryan just stated last week in Minneapolis. [page 2]

If we are not allowed to make remarks as to whether our country is right or wrong, then we are no better off on this than the subjects of the Russian Czar, and where would your free speech be?

Those citizens expressing their views honestly and candidly before a war are better citizens than those who do not warn against the dangers.

Some of our papers and citizens are speaking of preparedness, increased army and navy. Those who are asking for [same] should consider that there should be an established world rule as to how far every country has the right to prepare (say, in proportion to population), otherwise there would be the same condition as with England and Germany, where the later had one man of war, England said she needed two or three to be prepared, and so there was no end to it. So it would be similar with us and all other nations on preparedness, unless some world's rule was established.

If Mr. Wilson and Mr. Lansing [had] laid the embargo to Europe as [they] did to Mexico the European controversy would have been [shorn] of its seriousness and Mr. Wilson would have shown true Christianity and Humanity.

I observe that you are not approving of the Peace Conference held September 5th and 6th in Chicago. Kindly consider, what does all our claim on Education, Christianity and Civilization amount to if we do not do our utmost to prevent wars, which today, should be Called a slaughter of human beings.

This matter of Peace and embargo should be put before every Senator and Representative candidate and we should do your utmost to defeat him if he is against it.

These expressions are from a person born here in Davenport over sixty two years ago and who has life long been in the United States and a Democrat.

Any writer claiming he wishes to upkeep Civilization, Christianity and have the world get the right benefits of Education, should do his utmost with his ability to avoid wars. If he or she is not doing this, they can make no claim whatever on the above three noble words, Education, Civilization and Christianity.

Hoping that all the Chicago Tribune writers want to belong to this noble cause, I am

P.S. Prefer no publicity as I am a poor writer, but would not object if you consider this worthwhile. 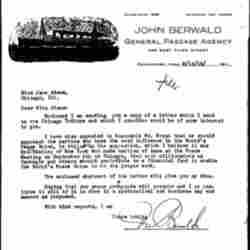 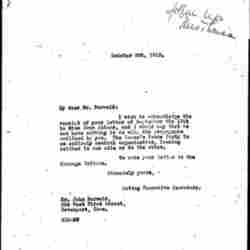 Berwald takes issue with the Tribune's stance that only true Americans have ancestors who spoke English. He also expresses his anti-war beliefs.