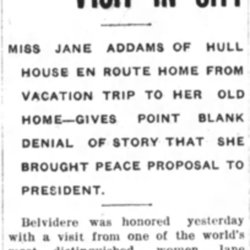 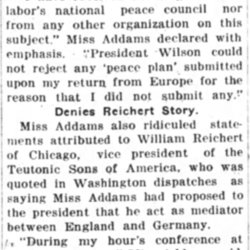 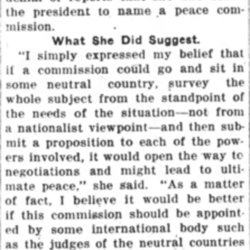 Belvedere was honored yesterday with a visit from one of the world's most distinguished women, Jane Addams of Hull House, Chicago. It was for but a few brief minutes, in fact only while the east bound Northwestern train stood at the station here, Miss Addams being en route to Chicago from a visit at her old home at Cedarville, near Freeport.

"I have not asked President Wilson to appoint a commission to formulate peace proposals to be submitted to the warring European nations and do not intend to do so."

This is Miss Jane Addams' answer to reports that she had urged a definite peace plan upon the president and subsequently received a telegram from labor's national peace council, in session in Washington, saying the chief executive had rejected it.

"I have received no telegram from labor's national peace council nor from any other organization on this subject," Miss Addams declared with emphasis. "President Wilson could not reject any 'peace plan' submitted upon my return from Europe for the reason that I did not submit any."

Miss Addams also ridiculed statements attributed to William Reichert of Chicago, vice president of the Teutonic Sons of America, who was quoted in Washington dispatches as saying Miss Addams had proposed to the president that he act as mediator between England and Germany.

"During my hour's conference at the White House," Miss Addams said, "I simply laid before Mr. Wilson the result of my experiences and interviews with leaders of thought in Europe. The president receives information from all sources. This was merely my contribution to the general fund.

"I told the president in detail what various persons we had interviewed had said, and he seemed very much interested. I told him of the resolutions adopted at the women's peace conference, and tried to put the situation before him as I had gathered it abroad. Our whole object is to substitute negotiations for fighting."

Here Miss Addams reiterated her denial of reports that she had asked the president to name a peace commission.

What She Did Suggest.

"I simply expressed my belief that if a commission could go and sit in some neutral country, survey the whole subject from the standpoint of the needs of the situation -- not from a nationalist viewpoint -- and then submit a proposition to each of the powers involved, it would open the way to negotiations and might lead to ultimate peace," she said. "As a matter of fact, I believe it would be better if this commission should be appointed by some international body such as the judges of the neutral countries represented in The Hague court, or by the inter-parliamentary union. It is not necessary for the president to name it.

"The whole crux of the situation is this: The warring nations at present are not even being 'tempted' to peace. As one of the prime ministers put it to me, 'Nobody presents us with any basis for peace.'" 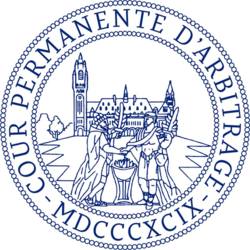 Addams clarifies fact from rumor with regard to stories about her meeting with Woodrow Wilson.