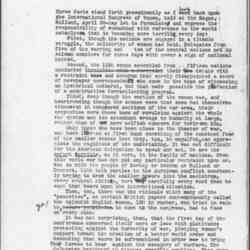 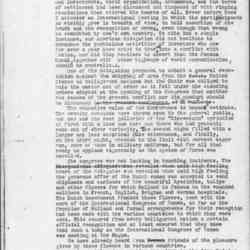 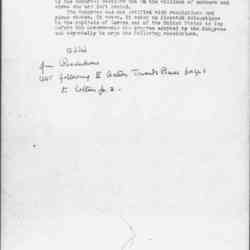 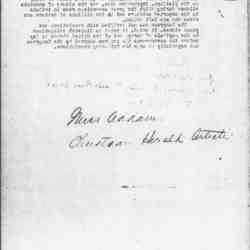 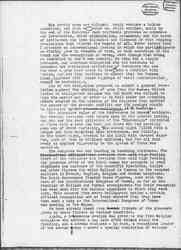 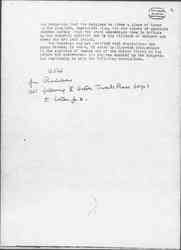 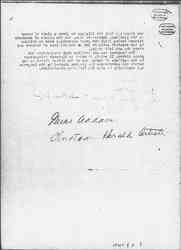 Three facts stand forth preeminently as I look back upon the International Congress of Women, held at The Hague, Holland, April 28-May 1st to formulate and express the responsibility of womanhood with reference to the world cataclysm that is becoming more terrible every day:

First, though the nations are engaged in a titanic struggle, the solidarity of women has held. Delegates from five of the warring and ten of the neutral nations met in solemn conclave for three days with never a sign of national hatred.

Second, the 1150 women assembled from fifteen nations conducted themselves with a restraint their the debate with a restraint that and decorum that sorely disappointed a score of newspaper correspondents who came in the hope of witnessing an hysterical outburst, but that made possible the perfection of a constructive forward-looking program.

Third, deep though the emotion of the women was, and heartrending though the scenes were that some had themselves witnessed in conquered sections of the war area, their sympathies were those born of revulsion against the whole war system and its attendant wrongs to humanity at large, rather than of the more selfish concern for their own kin.

Only those who have been close to the theater of war, and have learned at first hand something of the constant fear of the smaller states lest they, too, be engulfed, can appreciate the magnitude of the undertaking. It was not difficult for the American delegation to speak and act. We are the enfant terrible, as it were, in the family of nations. Even this world war has not put any particular restraint upon us. Not so with the people of Norway or Sweden or Holland or Denmark. With both parties to the European conflict constantly trying to draw the smaller powers into the maelstrom, every neutral citizen, must weigh carefully every word that he says that bears upon the international situation.

Then, too, there was the ridicule which many of the "peacettes", as certain British papers contemptuously called the splendid English women, 180 in number, who tried in vain to <get> secure permission to come to the congress, had to face on every side.

It was not surprising, then, that the first day of the conference concerned itself more or less with platitudes protesting against the barbarity of war, pledging woman's support toward the creation of a better world order and demanding that women be enfranchised in order her to bring their forces to bear against the savagery of warfare. The delegates hesitated to discuss specific problems. They were timid in their utterances. We of America, accustomed to unbridled speech, had arrived later than the other delegations due to <because of> four days of delay off Dover, England and had not yet become acclimatized. [page 2]

But pretty soon one delegate would venture a bolder assertion, and then another and still another, until by the end of the Congress such intricate problems as commerce and investments, world organization, armaments, and the terms of settlement had been discussed and disposed of with ringing resolutions that stirred the hearts of all. Never before have I attended an International Meeting in which the participants so visibly grew in breadth of view, in bold assertion of the truth and the recognition of wrong, even though that wrong be committed by one's own country. To cite but a single instance, our American delegation did not hesitate to denounce the pernicious activities of investors who now for over a year have tried to draw <us> into a conflict with Mexico, nor did they hesitate to assert that the Panama Canal, together with other highways of world communication, should be neutralized.

One of the delegation proposed to submit a general resolution against the shipping of arms from the U.S.A. United States to belligerent nations but the Chair was obliged to rule the matter out of order as it fell under the standing orders adopted at the opening of the Congress that neither the causes of the present conflict nor its conduct should be discussed in the present conference. <at its meetings.>

The educative value of the Conference is beyond estimate. The evening sessions were thrown open to the general public, and one saw the vast galleries of the "Dierentuin" sprinkled at first with a lone man here and there who had probably come out of sheer curiosity, the second night filled with a larger and less [skeptical] male attendance, and finally, on the third night, crowded to the limit with earnest eager men, some of them in military uniforms, but for all that ready to applaud vigorously as the system of force was assailed.

The congress was not lacking in touching incidents. The heart of the delegates was revealed when amid high feeling the generous offer of the Dutch women was accepted to send shiploads and carloads of the beautiful hyacinths, tulips and other flowers for which Holland is famous to the wounded soldiers in French, English, Belgian and German hospitals. The Dutch Government franked these flowers, sent with the card of the International Congress of Women, as far as the frontier of Holland and formal arrangements for their reception had been made with the various countries to which they were sent. This secured from every belligerent nation a certain official recognition and at least ensured that they knew that such a body as the International Congress of Women was meeting at The Hague.

We have already heard from French friends of the pleasure given by these flowers in various countries.

Again, a tremendous ovation was given to the five Belgian delegates who arrived a day late after delays along the frontier, and a German delegate -- in fact, a recognized leader of the German group -- moved a special resolution of welcome [page 3] and requested that the Belgians be given a place of honor on the platform. Impressive also, was the minute of absolute silence during which the great assemblage rose in tribute to the departed soldiers and to the millions of mothers and wives who are left behind.

The Congress was not [satisfied] with resolutions and pious wishes. It acted. It voted to dispatch delegations to the capitals of Europe and of the United States to lay before the Governments the program adopted by the Congress and especially to urge the following resolutions. 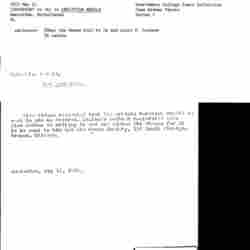 Secretary to Jane Addams to Christian Herald, May 11, 1915 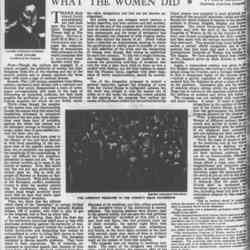 Addams and Lochner retell the events of the International Congress of Women.