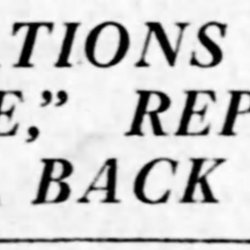 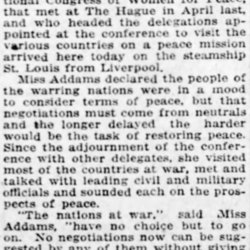 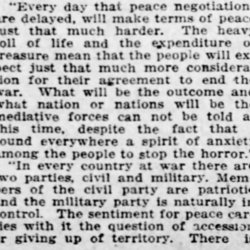 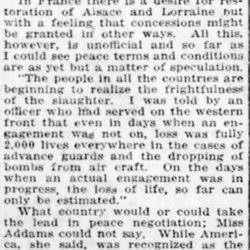 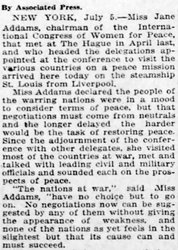 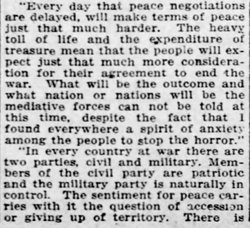 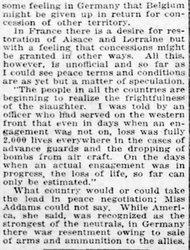 "WARRING NATIONS IN MOOD FOR PEACE," REPORTS JANE ADDAMS, BACK FROM EUROPE [page 2]

NEW YORK, July 5. -- Miss Jane Addams, chairman of the International Congress of Women for Peace, that met at The Hague in April last, and who headed the delegations appointed at the conference to visit the various countries on a peace mission arrived here today on the steamship St. Louis from Liverpool.

Miss Addams declared the people of the warring nations were in a mood to consider terms of peace, but that negotiations must come from neutrals and the longer delayed the harder would be the task of restoring peace. Since the adjournment of the conference with other delegates, she visited most of the countries at war, met and talked with leading civil and military officials and sounded each on the prospects of peace.

"The nations at war," said Miss Addams, "have no choice but to go on. No negotiations now can be suggested by any of them without giving the appearance of weakness, and none of the nations as yet feels in the slightest but that its cause can and must succeed. [page 3]

"Every day that peace negotiations are delayed, will make terms of peace just that much harder. The heavy toll of life and the expenditure of treasure mean that the people will expect just that much more consideration for their agreement to end the war. What will be the outcome and what nation or nations will be the mediative forces can not be told at this time, despite the fact that I found everywhere a spirit of anxiety among the people to stop the horror."

"In every country at war there are two parties, civil and military. Members of the civil party are patriotic and the military party is naturally in control. The sentiment for peace carries with it the question of accession or giving up of territory. There is [page 4] some feeling in Germany that Belgium might be given up in return for concession of other territory.

"In France there is a desire for restoration of Alsace and Lorraine but with a feeling that concessions might be granted in other ways. All this, however, is unofficial and so far as I could see peace terms and conditions are as yet but a matter of speculation.

"The people in all the countries are beginning to realize the frightfulness of the slaughter. I was told by an officer who had served on the western front that even in days when an engagement was not on, loss was fully 2,000 lives everywhere in the cases of advance guards and the dropping of bombs from air craft. On the days when an actual engagement was in progress, the loss of life, so far can only be estimated."

What country would or could take the lead in peace negotiation; Miss Addams could not say. While America, she said, was recognized as the strongest of the neutrals, in Germany there was resentment owing to sale of arms and ammunition to the allies. 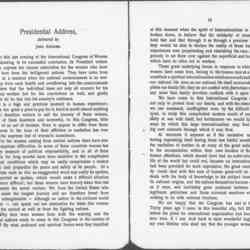 Addams discusses the likelihood that the war will cease without the efforts of neutral nations.