Documents in this collection 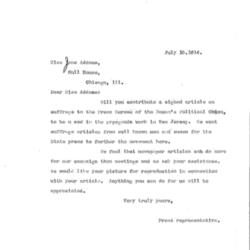 The Union requests an article on suffrage to use in propaganda work in New Jersey. 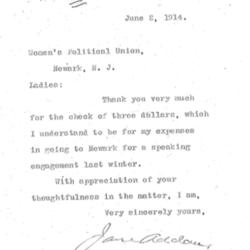 Addams thanks the Union for reimbursing her travel costs for a speaking engagement in Newark. 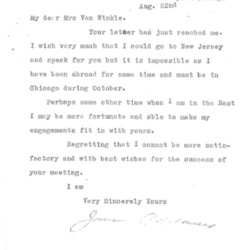 Addams tells Van Winkle that she cannot speak for the League of Women Voters in October. 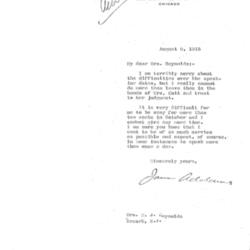 Addams apologizes for being unable to accept a speaking date in October for the New Jersey League of Women Voters.

The records reflect major areas of state League activity and interest as well as the administration of the state League and its relationship with the national and local leagues. Throughout the collection the League's main objectives of non-partisan political education and reform of state and local government are documented. Of particular interest is the League's involvement in the drafting and campaign to ratify the New Jersey Constitution of 1947. The early records also document the League's support of social legislation, such as the regulation of women's industrial work, restriction of child labor, prohibition and other issues. The greater part of the collection, however, documents the League's program after 1945, particularly its support of expanded educational opportunities, equalization of the tax burden, protection of the environment, and regional planning.